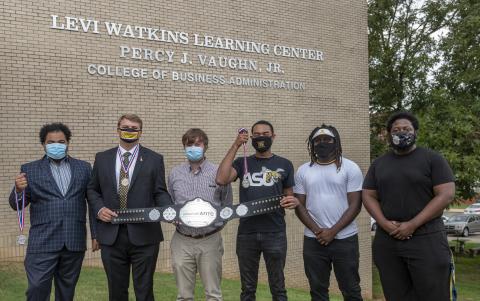 Alabama State University’s  “Stingers” team has earned bragging rights after beating out some tough competition in the InnovativeAFITC 2020 Hackathon and Cyber Challenge, a contest that challenges participants to create innovative solutions to significant cyber obstacles and threats.

The Stingers beat out Auburn University Montgomery (Digital Warhawks, 3rd place) and Troy University (3-J, 2nd place) for the overall win. Nearly 100 students participated, including groups from local Wetumpka and Pike Road Schools, as well as airmen and IT professionals.

This year, participants took part in three virtual events -- Esports, Network and System Challenge, and an Application Build and Pitch competition to help solve COVID-19-related obstacles that impact communities across the country.  Teams connected with the military and industry IT professionals to compete in the three events.

Pugh, Watkins and Ferguson competed in the Esports event, where each team selected a member to participate in a Double Elimination SMASH BROS Tournament. This tournament was played using the Nintendo Switch Gaming System; points were awarded for wins.

Pugh said his team participated in a lot of training before the Esports competition.  That training seemed to help. “The competition was pretty easy. I felt accomplished after it was over.”

Chatmon competed in the networking and systems challenge, where he had to test his skills as both a system and a network administrator. Teams competing in this challenge had to configure multiple firewalls and servers for common resource access.

“I came into this competition as an accounting student, and there was a lot I had to learn and research. So, this was a big learning experience for me. I’m very glad I competed,” Chatmon said. “I’m glad we won too.”

Boring was a challenger in the Application Build and Pitch event where collaborative teams had the opportunity to build software applications that could support the community during the pandemic in the following areas: education, medical, logistics or hospitality.

Hollifield said his role was to guide the team. “If the team got stuck on anything, I nudged them in the right direction. It was student driven. “

At the conclusion of the event, each team pitched their solution to a diverse panel of judges. The team with the highest points won the overall.

Dean of the College of Business Administration, Dr. Kamal Hingorani, said the Hackathon is a great example of how Montgomery is tackling workforce development, encouraging collaboration and becoming more innovative.

“I’m very excited and proud of the team’s win. This event taps into talent that is right here in Montgomery, especially at ASU,” Hingorani said.

Charisse Stokes, director of TechMGM, emphasized in a video of the event that the Hackathon is a great opportunity to solve current challenges in our community.

“Each year, we try to have a creative, collaborative and fun competition.  The event connects and shows the value in collaboration and solving real-world problems,” Stokes said.

Stokes pointed out that InnovativeAFOITC is made possible through a partnership with, but not limited to, Montgomery Area Chamber of Commerce’s initiative called TechMGM, Montgomery AFCEA Chapter Education Foundation, Chief Information Officer, and Office of the Air Force. Local support includes the Mayor’s office, Baptist South, Comp Services, state of Alabama Department of Education, Montgomery Convention and Visitors Bureau, and Montgomery East Sports and Gaming.