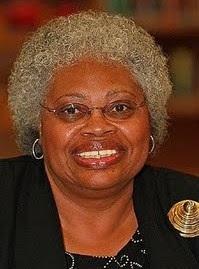 An Alabama State University staff member, who is also the chairwoman of the state’s Black Heritage Council, has won the most prestigious award bestowed by the Society of Alabama Archivists.

ASU’s Frazine Taylor was awarded the coveted Marvin Yeomans Whiting Award at the Archivist’s annual statewide meeting, which was held in Decatur on Oct. 4. Taylor works at the University’s Levi Watkins Learning Center (LWLC) and is involved in myriad projects there, which include archival and general library studies and African-American genealogy.

The Whiting Award is given to an individual or an entity that has been involved in making “a significant contribution to the preservation and dissemination of local history in the state of Alabama.” The award is named in honor of the Birmingham Public Library’s first archivist, Marvin Y. Whiting, who was a pioneer of the archival profession in Alabama.

Taylor said she was “pleasantly surprised” to receive the award.

“Receiving this honor is a confirmation of my lifelong work in the area of local Alabama history and genealogy,” Taylor said.  “I enjoy working with people or groups to help them learn more about their local communities, churches and families through archival research.”

Before coming to work at Alabama State University, Taylor was the co-head of the reference department for the Alabama Department of Archives and History.

Taylor is known and acclaimed as the top expert on African-American genealogy in Alabama according to Steve Murray, the director of the Alabama Department of Archives and History.

“There is no better deserving recipient of this award than Frazine in the entire state of Alabama,” Murray said. “She is hands down the leading Alabama expert in the study of African-American genealogy and this award is a confirmation of her service and expertise.”

Taylor is the published author of the book “Researching African-American Genealogy in Alabama: A Resource Guide” and is a consultant and a research source for the PBS television series “Finding Your Roots.”