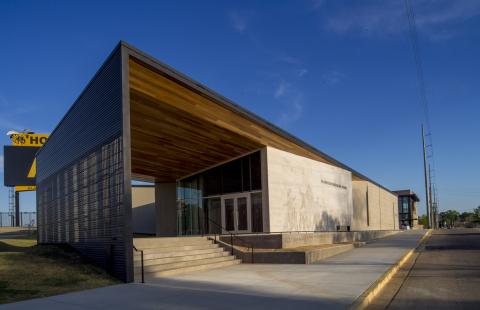 ASU President Quinton T. Ross Jr. and the Superintendent of the National Park Service’s Selma-to-Montgomery National Historic Trial, Floyd Myers, held a news conference on Feb. 25 to announce the date of the Grand Opening of the civil rights Interpretive Center at ASU.

The 11 a.m. March 25 Grand Opening is just in time for the 55th anniversary of “Bloody Sunday” and the Selma to Montgomery March of 1965.

“The Center stands here on ASU’s campus as a celebration and a hallowed reminder of a brave band of American citizens who stood up for equality, justice, freedom and the right to vote,” Ross said. “I thank the National Park Service for being our partner in this endeavor and the countless people who made this dream a reality.”

Ross noted that ASU alums also were a part of the fight for justice, including ASU alumnus F.D. Reese of Selma who led Selma’s movement and invited Dr. Martin Luther King Jr. to help him; and ASU alumnus Fred Gray, the attorney who filed and pled the lawsuit Williams v. George Wallace that made the march possible.

Superintendent Meyers reiterated that since ASU and the National Park Service has entered into a partnership that partnership is only continuing to grow.

“This is a journey of love,” Meyers said. “Ninety-five percent of the work that’s been done in this building has been done in-house or by local contractors.”

The activities leading up to the grand opening includes:

The day of the Grand Opening there will be a student march starting at the Ralph D. Abernathy Hall, music by the Hornets Marching band, booths, food and other activities.

“The event is open to the ASU family, the community and for people all over the nation to come and celebrate the history that was made in Montgomery, as represented in this facility,” said ASU archivist Howard Robinson.

Location and Exhibitions at Interpretive Center

Inside of the one-story, 473-capacity building, visitors will learn about the origins of the Civil Rights Movement, especially the people and students who put their lives on the line to fight injustice, events and route connected with the 1965 Selma to Montgomery March. They also will learn about the murder of Marion’s Jimmy Lee Jackson whose death served as the catalyst for the March.

“The center also will feature exhibits and educational programs,” said Meyers. “There will a little bit of everything. We will present the film, ‘Once Upon the Facts,’ to the facility,” said Meyers.

The Interpretive Center‘s location is strategic. It’s located adjacent to ASU’s football stadium on Harris Way, and across from the homes of civil rights icon Ralph Abernathy and singer Nat King Cole.

This center is the third and final civil rights Interpretive Center along the Selma to Montgomery Civil Rights Trail. The other interpretive centers are in downtown Selma and in Lowndes County.

The trail was used by Dr. Martin Luther King Jr. and tens of thousands of men and women who marched the 54 mile route in 1965 for the right to vote.

“The Center serves as a reminder of what Dr. King, Congressman John Lewis, F.D. Reese and so many others did to make equal justice and freedom a reality for all. It also serves as a reminder that we still have further to March before Dr. King’s ideal of a Beloved Community is achieved,” Ross remarked.

Ross said he believes very strongly in the value and power of education to transform the lives of students for the better and he believes the new Interpretive Center will do that.

The 14 internships are funded by the National Park Service.

“These interns will be Alabama State University students and they will be working in this building,” Meyers said. “The interns will help run the Interpretive Center.”