ASU Scientist Gets $140K Grant To Study Time of Death 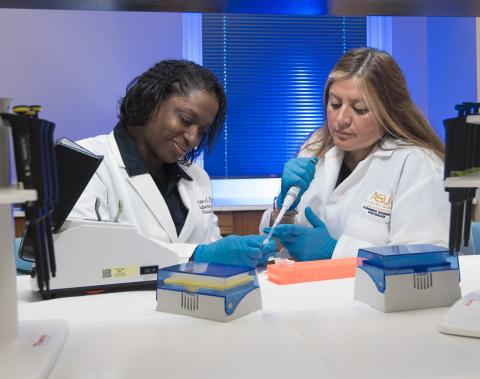 By: Kenneth Mullinax/ASU
One of Alabama State University's most acclaimed scientists and researchers - who has added to the lexicon of forensic science terminology - has again been awarded a substantial grant to further the study earlier begun by her and her research partners that creates a cause-of-death model to assist in death and homicide investigations.
ASU's Dr. Gulnaz Javan has been awarded $140,000 out of a grant totaling $393,000 from the National Institute of Justice (NIJ) to study the thanatomicrobiome, which is the *microbiome of death.
Her scientific collaborator on this project is Dr. Jack Gilbert, a professor at the University of California-San Diego School of Medicine (UC San Diego), which is awarded the other portion of this one-year grant. Its purpose is to enable both ASU and UC San Diego to collaboratively build a model that can be used by criminal investigators and forensic crime lab experts to better predict a cadaver's cause of death based on microbial and metabolic signatures associated with its liver and brain tissues.
* NOTE: A microbiome is defined as the collective genomes of the microbes (composed of bacteria, bacteriophage, fungi, protozoa and viruses) that live inside and on the human body.
One of the scientist working with Javan praised the awarding of the grant, as well as her hard work and dedication to ASU's students who are enrolled in the University's forensic science program.
"The acquisition of external funding from the NIJ is critical to our programs impacting the largest number of students pursuing either graduate studies or meaningful employment upon graduation. Dr. Javan’s role in securing this grant's funding from NIJ, as well as other agencies, speaks to her work ethic and willingness to go the extra mile for our students in the forensic science programs," said Dr. Robert Green.
GRANT ABOUT BETTER DETERMINING TIME OF DEATH
Javan is both a forensic scientist and a microbiome expert and is credited for coining the term "thanatomicrobiome," which describes the collection of microbes from internal organs taken during the criminal casework portion by investigators and forensic pathologists when a deceased person's body is discovered.
Javan explained that this current grant is in addition to a 2017 NIJ grant awarded to the two schools. One of the many goals of the 2021 grant is to better determine the time of death, which greatly aids criminal investigators and coroners.
“Human decomposition depends on many influences relating back to the cause of death that includes insect and microbial activity, as well as environmental factors," Javan said. "My 'Thanatos Lab' staff at Alabama State University and I are poised to uncover these contributing factors that will inform and advance forensic discoveries. Through this grant, my team will find ways to fine-tune the postmortem microbial clock, which will aid in the prediction of the time of death in humans.”
News media contact: Kenneth Mullinax, 334-229-4104.
###