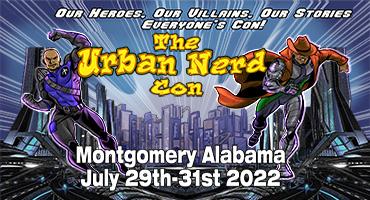 Organizers expect thousands to attend the three-day fan convention from July 29-31 at the Cramton Bowl Multiplex.

The Urban Nerd Con, which spotlights black artists, is a multicultural comics, gaming, cosplay and tech event.  Fans, who can dress  in their favorite comic hero costumes, can come to see and buy the best independent artwork, comics, novels and games from the “Defenders of the Disapora.”

Both professors said fans will also have the opportunity to learn and participate by taking part in several tracks of programming, including panels aligned to their interests.

Morrison and Allen will engage convention-goers on Sunday with their panel topic “Articulating the (Black) Action Figure: The Meaning and Significance of Toys in Black Popular Culture.”  Panelist EJ White, who is co-owner, along with Morrison and Darryl Haddock,  of Remember When, LLC,  a pop culture, collectible and toy business, is also on tap to speak.

“This panel will explore the significance of black action figures from the 1960s to the present as material culture,” Morrison said. “Toys can tell us a great deal about changing cultural attitudes and values, and about the exercise of power in society.”

“… Images like Lieutenant Uhura or the black Jedi Master of ‘Star Wars” or the black Green Lantern or other black heroes are atypical  to the stereotypical images that existed of people of color in the ‘60s… Here was another space carved out for people of color through these action figures where you can see yourself differently,” Morrison said. “They provide a rebuttal to the stereotypical images that historically existed of black people.”

Allen said black action figures are a marker for change, it leaves young black generations with the idea that they should be proud and strong and they are no less than anyone.

“I’m impressed when I can find toys and action figures that show some kind of diversity. As a toy collector, I’ve been aware of the shift. As a parent, it has become more important to see the representation of diverse people and African American people in general for children, to let them know that a black hero is even possible for a black child to play with,” Allen emphasized.

Allen, who calls himself a comic book and pop-cultural person, will sit on another panel involving artists breaking into the entertainment and comic book industry.

“I have a student, Ronald Martin, a sophomore, who will have a table at the Con. He has been working on his own individual comic book for some years now," Allen said. "To me, it’s a career fair of the arts in addition to being a popular cultural conference. These comic book conventions in general are a gateway to careers in the entertainment industry for visual artists. It’s really, really exciting to have one that is Afrocentric-based that is coming to Montgomery and looking to promote specifically diverse voices in getting into this mainstream industry. I see the arts being at the forefront of whatever wave of change that will come around."

Morrison also will sit on another panel titled, “The Heroes Go to School…And Teach!," which will discuss how the medium of comic books/graphics novels can be used to teach students in the educational setting and how they can help increase academic achievement as well as a love of reading.

Both professors encourage people to attend.

“I recommend to people, whether you are an artist or not, to attend to see all this creativity unleashed and be reinvigorated about your city,” Allen said.