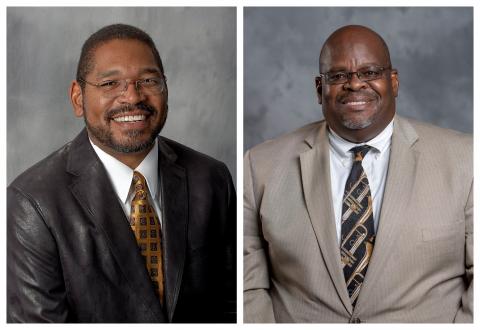 Alabama State University's professors played a pivotal role in erecting a historic monument to honor the “Mother of the Civil Rights Movement” as part of the city’s celebration of the birth of the civil rights movement and the Alabama's bicentennial celebration.

Dr. Howard Robinson, ASU archivist, and Nathaniel Allen, chairman and associate professor of the Department of Visual Arts, were selected by city officials and the Montgomery Area Business Committee for the Arts to serve on a three-member oversight committee to help erect a Rosa Parks statue. The third member was Dr. Felecia Bell, director of Troy University's Rosa Parks Museum.

ASU's Allen, a master sculptor and artist, has worked on several creative projects for the city through his role on the Montgomery Public Arts Commission. He said supporting the arts is important.

“It has been an absolute honor and pleasure to work with talented people to promote the arts in the city of Montgomery.," Allen said. "Going forward, I have high hopes that the city leadership will recognize and continue to support the great creative strides Montgomery is making,” he said. 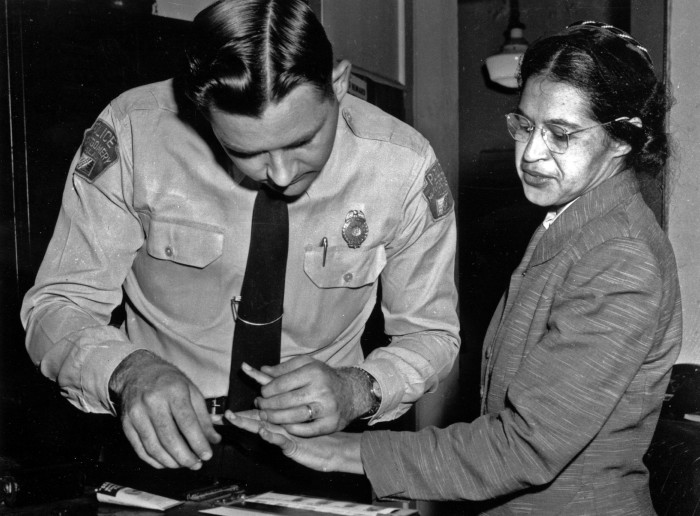 Rosa Parks being fingerprinted after her arrest in 1955.

ASU PROFESSORS INVOLVED IN EACH ASPECT OF THE PARKS STATUE

The committee met regularly between June and September 2019 with sculptor Clydetta Fulmer in her studio to discuss the work in progress for the Rosa Parks statue and to make suggestions regarding its historical and aesthetic accuracy. The life-size clay sculpture was eventually cast in wax, edited/detailed one last time by the artist, and finally cast in bronze. The completed clay version of the sculpture was cast in October.

“When I was introduced to the project, it was a bust, just a head,” said ASU's Robinson. “Decisions had already been made where the statue would be placed, and that was at Court Square, right where she first would have gotten on the bus.  Decisions also were made to illustrate her on the actual day the Montgomery bus system was desegregated,” he added.

That depiction is important, according to Robinson.

“Recent scholars have indicated that Rosa Parks was much more vocal, deliberate and much more an activist than she was depicted.  I wanted her demeanor to reflect that and not the inaccurate idea that she was tired and she just didn’t feel like giving up her seat,”  Robinson stated.

Allen agreed. “Beyond her likeness, we also sought to suggest her strength, tenacity, and optimism through the finished piece.”

“The statue depicts Rosa Parks wearing her glasses, signature pill hat, gloves and a warm wool coat. Her hair is like it always was in a bun.The inspiration is from images of that day. The artist was very meticulous, very conscious about how the statue was depicted,” Robinson said.

Robinson stated Parks’ hair was a concern, so they reached out to a hairdresser to ensure it was accurate.

“There were concerns about how the bun was shaped and how it would have been created, so we talked to a black hairdresser about the hair and how that hair should be portrayed,” Robinson said.

Her coat was another focus. “Allen observed that the coat that Parks was wearing was a little stiff. He wanted it to flow so he suggested that the artist put some wrinkles in the arms and that there be more movement in the coat to reflect a windy day,” Robinson said. “It added character.”

The life-size bronze statue will be unveiled at  the downtown Montgomery plaza at the Court Street Fountain at 1 p.m. on Sunday (Dec.1), during the Rosa Parks Day Celebration that is held on the anniversary of Parks' arrest, which is part of the city’s bicentennial celebration.

“Parks quiet act of defiance resonated throughout the world,” Robinson said. “The boycott culminated in the desegregation of public transportation in Alabama and throughout the country.”

WOMEN LED THE BIRTH OF THE MOVEMENT IN MONTGOMERY

Parks, who was 42 when she was arrested in 1955, was not the first person to be prosecuted for violating the segregation laws on the city buses in Montgomery. According to Robinson, there were four other women that included 15-year-old Claudette Colvin, who was arrested before Parks, as well as Mary Louise Smith, Aurelia Browder and Susie McDonald.

“All four were arrested and part of the Browder v. Gayle case (Aurelia was the lead litigant) that ended the bus boycott,” Robinson said. “There was a fifth litigant, Jeanatta Reese, but she dropped out of the lawsuit initiated by Attorney Fred Gray (ASU class of 1951) after a day because of intimidation by members of the white authorities. She falsely claimed she had not agreed for Gray to use her name in the lawsuit.”

These women rose to the occasion and made significant contributions to the civil rights movement, although they received little notice by historians of that time period, Robinson explained.

The city will now also honor those women and what they did to aid the birth of the civil rights movement thanks to a suggestion by Robinson.

“Parks symbolized a resistance to inequality and segregation, but so did these other women,” Robinson said. “The city agreed to have inlays at the base of the statue that chronicle the names of those four women so they will be represented.”

MANY OF THESE WOMEN HAD ASU CONNECTIONS

Three of the four women named by Robinson have ASU connections. For example, Browder and McDonald were ASU alumnae and Parks went to Lab High at Alabama State Teachers College for Negroes, now ASU.

In a way, Robinson and Allen are now part of Alabama's history.

“To help shape how the public is going to see Rosa Parks is a wonderful opportunity,” Robinson said, adding making the suggestion to add the names of the four women at the base of the statue was another proud moment.

When Parks died at age 92 in 2005, she became the first woman in the nation’s history to lie in state at the U.S. Capitol. 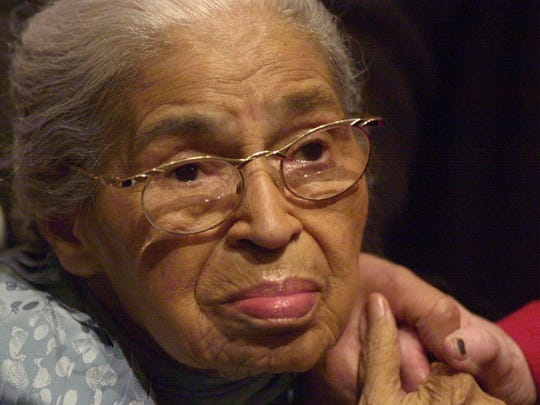