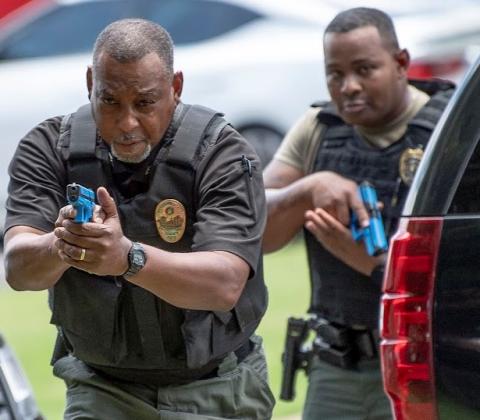 The Alabama State University Department of Public Safety (ASU DPS) held an “active-shooter” training demonstration on campus over a three-day period from July 13- 15. The training was held in conjunction with the Montgomery County Sheriff's Office and is part of ongoing efforts to keep the ASU campus, students and employees as safe as possible by exposing DPS officers to the latest techniques and strategies used by law enforcement in handling violent activity.

"We hold continuous training for our law enforcement officers both in classrooms and in 'active participant' situations so they may be best equipped to successfully stop any forms of criminal violence on the ASU campus," said Kelvin Kendrick, director of ASU's Department of Public Safety. "We were glad to be joined by Montgomery County Sheriff Derrick Cunningham's special training officers to help our police be advised and learn the very latest techniques and procedures to deal with any active-shooter events and other crimes at ASU."

One of a series of active-shooter demonstrations was held in ASU's Abercrombie Residence Hall on July 15. The site was chosen because it was absent of any students due to an ongoing renovation project. After ASU officers received classroom instruction, they participated in scenarios set up by Sheriff’s Department training officers to mimic both shooting and hostage events. Officers used blank rounds of ammunition during the exercise and were evaluated on how well they implemented the classroom training.

"Due to the sensitive and proprietary nature of the training, no details of exactly what takes place during the live-shooter training is shared with anyone other than the law enforcement officers involved in the training," explained ASU's Sgt. Kim Todd, who helped supervise the training.

THANKS TO SHERIFF CUNNINGHAM AND STAFF

Kendrick said this type of training is crucial to his department’s efforts to keep the campus safe, and he offered his thanks to those who facilitated the three-day sessions.

"ASU's Police Department sincerely thanks the Montgomery County Sheriff's Office -- and especially Sheriff Cunningham -- for allowing his training officers to spend three days with our police officers so as to continue Alabama State University's on-going training. It is important to continue to be both updated in the latest procedures, and to be vigilant, and prepared for any type of threat on our campus to the safety and security of the University's students, employees and visitors," Kendrick said.