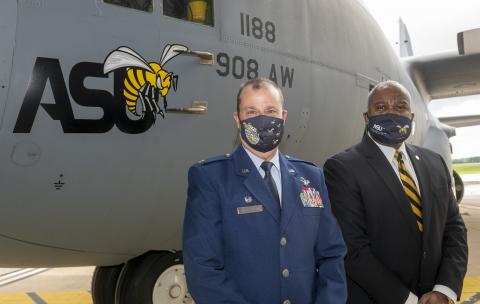 Alabama State University participated in a special ceremony on October 29, 2020, with the 908th Airlift Wing located at Montgomery’s Maxwell Air Force Base.

Officials from the 908th and ASU unveiled the distinctive nose art, featuring the University’s logo, that now adorns one of the ​​reserve unit’s C-130 aircraft.

“This nose art will be seen all around the world as we execute our tactical airlift missions,” said Col. Craig Drescher, Commander of the 908th Airlift Wing. “And we often refer to the plane by the nose art or name that is on the front. So from this day forward, all around the world, people will refer to this as ‘The ASU Plane.’”

Drescher said the naming of military aircraft is a longstanding tradition. He said he is proud to acknowledge the relationship between ASU and the 908th with the naming of the C-130 in the University’s honor.

“Having the Hornet logo to adorn the nose of one of the 908th’s celebrated C-130 Hercules aircraft is indeed an honor that will be a cherished part of the University’s history,” said Ross. “Today’s unveiling serves to strengthen the partnership between ASU and the 908th Airlift Wing, Alabama’s only Air Force Reserve unit. Since it’s relocation to Maxwell Air Force Base in 1969, members of the 908th have participated in numerous missions around the globe to defend our nation’s freedom during times of war and have flown missions of mercy to areas around the country during various disasters and emergencies at home.”

Drescher also announced that a special identification number had been added to the ASU logo in honor of ​Jarvise Gibson, a member of the maintenance group for the C-130 that bears the University’s name. ​Gibson​ was an ASU alumnus who recently passed away and Drescher said his fellow airmen wanted to honor him.

“At ASU, we are proud of our connection to the Air Force through the ​​Detachment 019 (oh-one-nine) Air Force ROTC program, which is located on the campus of Alabama State University… Each year, a new class of cadets is commissioned to serve as officers in the United States Air Force. This longstanding tradition is one that we look forward to continuing for years to come.

“And now, we have a new and visible connection to the 908th Airlift Wing with today’s unveiling. Hornet Nation is proud to know that the name of our great University…a University that has been grounded in the history of the state of Alabama for more than 153 years…will now soar with the Air Force Reserves whenever this beautiful aircraft behind me takes to the skies,” Ross added.

ABOUT THE 908TH AIRLIFT WING