​‘ASU Is On the Move,’ Ross Tells Convocation Participants 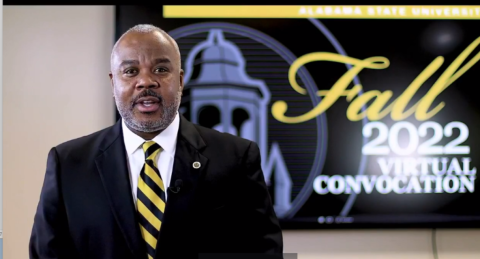 Alabama State University President, Dr. Quinton T. Ross, Jr., delivered a message of certainty that “ASU is on the move” in his State of the University address during the 2022 Virtual Fall Convocation on Thursday, Sept. 22.

“When my tenure began on Oct. 3, 2017, I invited all of Hornet Nation to join me with one primary, overarching goal – to move Alabama State University 150 years forward. Today, I can tell you that we are a University that is moving forward with a renewed commitment to excellence and a stronger resolve to fulfill our mission.  ASU is moving forward! WE ARE ON THE MOVE!, with a sense of purpose and the values of pride, integrity, impact, diversity and loyalty!” Ross exclaimed.

Though the ceremony was virtual, it still maintained the grandeur of past traditional ceremonies. The Convocation included virtual performances by the University Choir, special musical selections, the posting of the colors by ASU’s AFROTC Detachment 019 and inspiring greetings from special guests.

Ross’s message included a laundry list of some of the University’s major achievements in the past year, including ASU’s credit rating by Moody Investors Service was upgraded in its last two reports (a major aspect of moving ASU forward); ASU Hornets and the band made history as the first-ever HBCU to play or perform in the Rose Bowl; President Ross received a special proclamation from the city of Los Angeles when the ASU Hornets played the UCLA Bruins in California (Hornets fans showed up in big numbers); the University Choir will perform at the internationally renowned Carnegie Hall next year;  new programs such as the Master of Business Administration and micro-credentials have been established; deserving students are getting over the finish line via the ASU C.A.R.E.S. initiative; and major upgrades are being made to campus facilities, such as new turf for the ASU Stadium and Hornet Stadium.

Ross also highlighted the successes under the University’s new Strategic Plan (Focus 2030), a roadmap to guide the institution for the next eight years.

One core goal of the plan, Ross remarked, focuses on continuing to establish partnerships with local, state and national organizations to provide internships, scholarships and career-readiness programs for ASU students, and to provide service to the community.

“With our partnership with the Alabama Department of Public Health, ASU Health Services, under the direction of Dr. Joyce Loyd Davis,  received $750,000 in grants to provide COVID testing and vaccinations locally and across the state of Alabama,” he said, as an example of the many partnerships that have been forged over the past five years.

Other partnership and philanthropic investments in the past year, Ross noted, have helped move ASU forward.

“We held the President’s Gala where we were able to announce that our 12-month record of philanthropic investments in ASU totaled more than $8.7 million dollars. We are extremely grateful to those who invest in ASU because these gifts and donations help to provide scholarships, internships and other avenues that support student success,” Ross emphasized.

Ross also shared the exciting news that ASU will be the site of the 2023 Honda Battle of the Bands.

“The organizers decided to stage the event at an HBCU for the first time…and ASU was selected. The Battle of the Bands will bring thousands of fans to our campus and to our city. Events such as this exemplify the impact that Alabama State University has on the city of Montgomery and the River Region,” Ross explained.

Ross concluded by underscoring an important message of unity.

“ASU is on the move! We must continue to work together as a unit to accomplish a greater purpose: to Swarm As One.  We have a greater purpose to realize at Alabama State University. Academic Excellence focused on Student Success will always be our goal. As we work as one…as we give as one, grow as one…believe as one…then we will elevate as one.  ‘ASU Is On the Move,’ Ross Tells Convocation Participants.

A video of the Fall Convocation can be viewed at https://fb.watch/fJLcJZcGfE/ It was live streamed on ASU’s official Facebook page, www.facebook.com/asu.