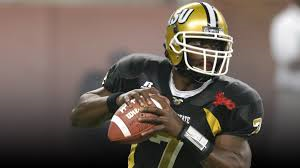 Alabama State University alumnus and former NFL quarterback, Tarvaris Jackson, has passed away due to injuries suffered in a car accident near his home in Pike Road, Ala., on April 12.

Jackson was a standout athlete for the Hornets, leading his team to a SWAC championship in 2004.

“Our thoughts and prayers go out to the Jackson family during this tragic time,” Alabama State director of Intercollegiate Athletics, Jennifer Lynne Williams, said. “He affected so many in this community with his willingness to serve and teach the game of football to the youth in Montgomery. He impacted so many lives in and around Alabama State and the city of Montgomery. A humble young man, he will be truly missed and will be remembered as one of the true legends of Alabama State football.”

Jackson was drafted in the second round by the Minnesota Vikings in 2006, and played for the Vikings, Seattle Seahawks and Buffalo Bills.

Jackson played for the Seattle Seahawks when the team won Super Bowl 48 during the 2013-2014 season. He accumulated 45 career touchdowns while playing in the NFL.

Jackson returned to his alma mater as an offensive quality control coach in 2018 after a 10-year career in the National Football League.

"Hornet Nation is saddened by the sudden loss of Alabama State University football legend, Tarvaris Jackson," said President Quinton T. Ross Jr. "He not only was a great athlete, but he also was a humanitarian, who was always willing to give of his time and resources to help young people who aspired to excel in sports. We send our prayers and condolences to his family, friends and former players as they deal with his tragic loss."