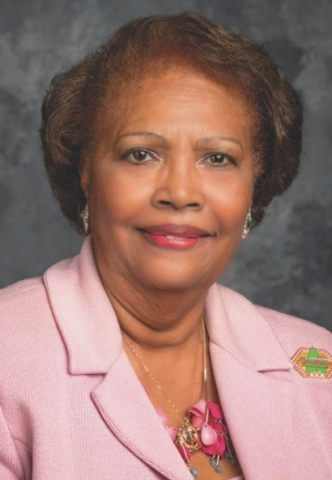 Nancy Gardner Sewell was a dedicated alumna of Alabama State University whose life was devoted to public service and giving back to her community. Sewell passed away on June 10 at the age of 81.

A resident of Selma, Ala., and the mother of U.S. Rep. Terri Sewell, Nancy Sewell was a member of the Beta Pi Chapter of ASU's Alpha Kappa Alpha Sorority, Inc., and is heralded with dedicating more than 50 years of her life toward the benefit of her community.

In his letter announcing her passing to the Hornet Nation, President Quinton T. Ross, Jr., noted some of her numerous historical achievements. “We are proud of Ms. Sewell's accomplishments throughout her life, and we embrace the lifelong example of fortitude and service that she has left as a legacy,” Ross said. “The prayers of Hornet Nation are with her family.”

Sewell earned the Bachelor of Science degree in Social Studies and Library Science from ASU in 1960. She has been described as the very epitome of a servant leader.

Foremost among her accomplishments is her election in 1993 and tenure as the first African-American female member of Selma's City Council. In that role, she actively served the residents of Ward 4 until she retired in 2004. Sewell's major accomplishment was her successful effort in 2001 to originate and receive a $1.3 million Digital-Divide AmeriCorps Grant, and it continues to benefit her constituents, as well as the entire city of Selma.

Selma and Dallas County leaders spoke highly of Sewell in comments released to the public since her passing.

Selma Mayor James Perkins, Jr., stated that Sewell was a "trailblazer" in the city's public arena and added that “Mrs. Sewell had a tremendous influence and made an extraordinary impact on the City of Selma."

Dallas County Commissioner Curtis Williams was quoted as saying, “Sewell was multi-talented and has excelled in every avenue of her life, as indicated by the numerous honors and awards bestowed upon her by her peers and community. She has never been content with the status-quo. Each endeavor throughout her rich life has been met with new and innovative ideas, insurmountable energy, and the ability to motivate people.”

Selma City Council President Billy Young said, “Selma, Alabama and many of its residents are better off because of the work of our beloved Mrs. Sewell. Her impact on our lives is longstanding and her work, which helped so many, will forever be remembered."

LIFE OF SERVICE TO THE COMMUNITY

A native of Hope Hull, Sewell spent her life serving others in such varied roles such as the library media specialist of the Selma City Schools for 36 years, head librarian at Selma High School, and as a member of the Selma City Council for 11 years. She most recently served as one of the national advisers to Dr. Glenda Glover, international president of Alpha Kappa Alpha Sorority, Inc. In her role as the coordinator of Selma's public school libraries, she pioneered the development of libraries for the Selma City School System by planning and implementing the automation of all the libraries in the city. She also implemented reading programs, such as the Accelerated Readers Program, throughout the city's elementary schools to enhance literacy.

ASU's President Ross reflected on Sewell's life and legacy as a civic leader and as a devoted Alabama State University alumna.

"Ms. Sewell was a strong advocate for equal justice and the fight against illiteracy, and she was passionate in her devotion to her alma mater, Alabama State University. The Hornet Nation will forever cherish her memory and honor her as a distinguished alumna," Ross stated.