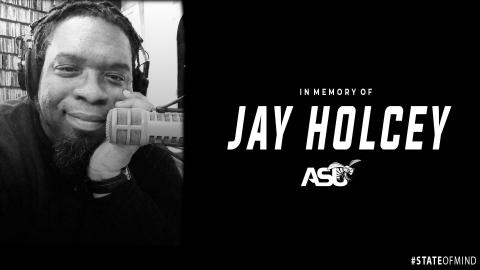 To the ASU Family:

We are saddened to announce the sudden passing today of a longtime Alabama State University employee and loyal member of the Hornet Nation family, Jay Holcey.

Jay was the music and programming director of ASU's WVAS 90.7 FM radio station, and for several years, he served as its interim station manager.

He was a familiar voice on ASU's public radio station and was an on-air presence for a diverse set of programming, which included Jazz, public affairs and sports.

We offer our deepest condolences and prayers to Jay's family and coworkers.

As soon as funeral arrangements have been finalized, we will share them with you.

Jay Holcey known as DJ Artifakt, was involved in radio broadcasting since he was in high school, working as an on-air host,  producer, and promotions assistant.  Jay joined the staff at WVAS, in 2005, to host the Sunday afternoon show titled Swing Town.  He replaced Bill "Philly" Boynton, who died unexpectedly.  Regarding Boynton as both a friend and mentor, Jay changed the name of the show to Bill Boynton's Swing Town.  This is a continuing tribute to the well-regarded former host.  Jay was a purist at heart for jazz and considers music to be his mistress.

During the football and basketball seasons he was an integral part of the ASU Sports Network.