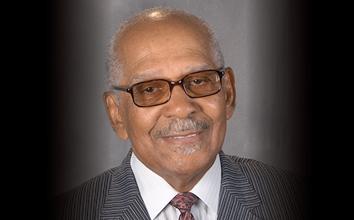 The founding dean of ASU's College of Business Administration has passed.

******
The Alabama State University family mourns the loss of legendary ASU educator, Dr. Percy J. Vaughn, Jr., who was considered to be one of the pillars of academic leadership at the University during his tenure that spanned more than three decades.

As the founding dean of the College of Business Administration (COBA), Vaughn helped to launch hundreds of ASU graduates into successful careers as business leaders, entrepreneurs and captains of industry.

To honor him for his service and dedication to ASU, his students and COBA alumni, the University dedicated the Dr. Percy J. Vaughn, Jr. College of Business Administration in his name on September 15, 2017.

“Dean Vaughn was an Alabama State University icon,” said ASU President Dr. Quinton T. Ross, Jr. “He was highly revered as both the visionary and the driving force behind the establishment of COBA, as well as the college’s focus on intense academic preparation, national internship and professional development opportunities, and global connections for COBA students. Even after his retirement, Dr. Vaughn continued to mentor students and graduates, always challenging them towards excellence in their professional pursuits and in their commitment to service. Dr. Vaughn was truly a legend. His impact on the field of education was felt not only on this campus, but around the world.”

Vaughn, a native of New Orleans, La., was a retired scholar, mentor and educator who served as a professor of marketing at ASU from 1975-2010.

Vaughn began his professional career with Boggs Academy as professor of Business Administration in 1957.  He then became an assistant administrator at Flint Goodridge Hospital.  From 1959 to 1968, Vaughn worked as a sales and public relations representative for Jackson Brewing Company.

In 1968, Vaughn returned to academia as an assistant professor of marketing at Southern University.  In 1972, he became a part-time instructor and visiting lecturer at Texas Tech University, while in pursuit of his doctorate.

Recruited in 1975 by President Levi Watkins, Vaughn was charged with developing quality curriculum, recruiting academically qualified faculty and helping to establish a world-class business school. He was notably successful at all levels, infusing the concepts of student preparation, globalization and entrepreneurship into every aspect of COBA’s vision and development. Vaughn’s accomplishments during his 35-year tenure are legendary.

Vaughn’s leadership nationally and internationally included visits to Seoul, South Korea; Shanghai, China; Warsaw, Poland; West Africa; and Taiwan. Many of those trips helped to forge agreements for study-abroad opportunities for ASU students and global connections for the University that still exist today.

Vaughn received numerous honors for his work as a business leader. In 1978, he was cited in “Jet” magazine as receiving the Robert Russa Moton Leadership Award for outstanding contributions in the field of business by the National Business League.

Vaughn held a number of volunteer leadership positions at the regional, national and international levels, notably serving as president of the Southeastern Region of the Accredited Council for Business Schools and Programs (ACBSP) and later as president of the national ACBSP in 2000-01. He was named an ACBSP emeritus member upon his retirement from teaching in 2010. Vaughn served as an ACBSP champion on ASU’s campus, working to ensure that the University secured accreditation of its business programs in 1993. (ACBSP reaffirmed accreditation of the business programs at ASU in 2013.) Vaughn also served as Chairman of the Board and president of the International Association of Black Business Educators (IABBE), 1982-1987.

In 2014, Vaughn, his family members, colleagues from Alabama State University and business educators from across the Southeast and as far away as Paris, France, traveled to the ACBSP office in Overland Park, Kan., for a ceremony to dedicate the Percy J. Vaughn Jr. Accreditation Library and recognize Vaughn for his commitment to delivering quality business education.

Viewing will be Friday, Oct. 26 from 1 – 6 p.m. at Ross-Clayton Funeral Home. The Omega Memorial Service will be held at 6 p.m., followed by a family hour. The funeral will be Saturday, Oct. 27 at 11 a.m. at Resurrection Catholic Church.

Memorial donations in memory of Vaughn can be made to the ASU Foundation Percy J. Vaughn Fund. P.O. Box 1046 Montgomery, AL 36101 or www.alasu.edu/giving.