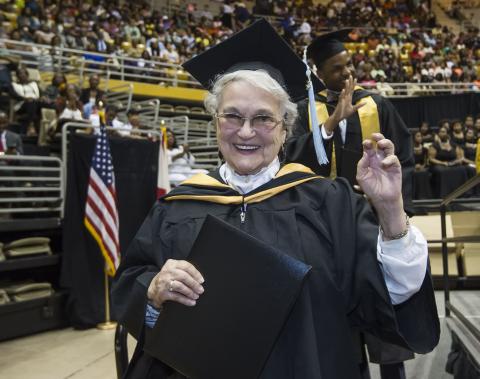 Alabama State University is deeply saddened by the loss of a woman who was known internationally as a civil and human rights activist, Jean Graetz, who died today at the age of 90. Mrs. Graetz and her husband, Rev. Robert Graetz, who passed away just three months earlier, openly supported the Montgomery Bus Boycott, the first white family to do so. Over their lifetime, the couple continued to speak and work on behalf of racial equality.

At ASU, Mrs. Graetz was also known as an avid supporter of her beloved alma mater. Mrs. Graetz earned her bachelor’s degree in education from the University in 2015. Robert and Jean Graetz were longtime consultants with ASU’s National Center for the Study of Civil Rights and African-American Culture, where an annual symposium is held in their honor.

Many of us knew Mrs. Graetz as a warm and caring woman who always had a smile and kind word for students and employees of the University.

Her presence will certainly be missed at Alabama State University.

We ask that you keep her children, grandchildren and friends in your thoughts and prayers.