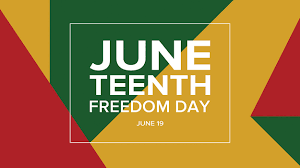 Members of Alabama State University’s faculty, staff and student body participated as panelists in a portion of one of Montgomery’s Juneteenth observances. Juneteenth is the nation's oldest celebration of the ending of slavery.

A number of entities partnered with presenting four different events that took place in Montgomery between June 12 - June 19 to honor Juneteenth that included a panel discussion on June 17 titled "Montgomery: Then and Now" at the Rosa Parks Museum. Half of the panel's participants were members of the ASU family which included the event's moderator, Melanie Hogan, news director for ASU’s WVAS-FM radio station and panel member's Dr. Regina Moorer, assistant professor of political science at ASU and one of the University’s student-scholars, Makhayla Des Rosiers, a rising senior majoring in political science. The entire week of events was coordinated by ASU alumna, Jasmine D. Hunter (class of 2012).

"In putting together this panel, I thought it important that we have the input and opinions from a wide-range of individuals that included participants associated with  Alabama State University because of several reasons that includes it being Montgomery's only Historically Black College or University (HBCU), its participation in the birth of the modern civil rights movement in 1955 and because of the important role it has had in the ongoing struggle for racial equality, freedom and civil rights since its founding by nine former slaves in 1867," said Hunter, who serves as the director of External Affairs at Southern University Law Center in Baton Rogue, La.

Hunter said the Louisiana law school partnered in helping to promote Montgomery's commemoration of its Juneteenth events with the cooperation of the Public Broadcasting System's (PBS) Frontline, which is a nationally syndicated PBS series.

In its PBS documentary project "Unresolved," Frontline was additionally looking at civil-rights-era cold-case (unsolved) murders, which the FBI reopened a few years ago and which it is actively looking to resolve through prosecutions, trials and convictions of "persons of interest" who committed these race-related homicides during the 1950s and 1960s. One of several of these cases is the murder of Montgomery resident Willie Edwards who was forced at gunpoint by members of the Ku Klux Klan to jump to his death off a Montgomery bridge into the Alabama River.

"The panel will discuss a wide range of topics that will include racial issues; crime, then and now, and how national events impact local politics in Montgomery. The PBS Frontline reporters are covering a few other Juneteenth events in the South. In addition to Montgomery, it is observing the commemoration and the opinions of participants, scholars and local residents in  Americus, Ga.; Jackson, Miss.; and Albany, Ga.," Hunter explained.

Panel member Dr. Regina Moorer of ASU believes among the core reasons to celebrate Juneteenth is the celebration of freedom.

"The epicenter of what we celebrate on Juneteenth and what our panel will discuss is black freedom, which starts with the Emancipation Proclamation. Our panel will also discuss the role of slavery in Montgomery, from the slave auction block that once stood on Dexter Avenue at its Court Square fountain to today's City Hall in Montgomery, which now has as its mayor, an African-American," Moorer stated.

Hogan says she hopes that the panel that she is moderating makes people celebrate the past and pause to think about the future.

"I view this panel discussion as a learning tool, which is appropriate since most of the members of this panel are representatives of Alabama State University," Melanie Hogan said by phone. "I hope we can help teach the audience about not only what happened in the past, but advance their thinking about what may be some possible solutions in the future that will help curtail the divisive nature of hate, crime, racial strife and confrontation, which we report on in today's current news cycle."

ASU STUDENT SAYS "IT'S ALL ABOUT PROMOTING POSITIVE CHANGE"

The only student to sit on the panel believes it is an important goal for panel members not only to commemorate the past, but also to put forth ideas to create positive change in race relations.
"The celebration of Juneteenth is an ode to freedom from stereotypes, hatred, racial killings, and discord; but most of all, I believe it is about us all being change-agents for a better tomorrow," said Des Rosiers, a Chicago native.

"We all know that Montgomery has come a long way since slavery was the law here and when segregation laws were in effect; and by us discussing it as a panel, I hope that will create many individual panel discussions from dinner tables to board rooms, from individuals to family gatherings, which all will help advance Montgomery, and the nation, to a positive change," Des Rosiers shared.

According to its homepage, FRONTLINE is investigative documentary journalism that tells the stories others can’t or won’t discuss. Since 1983, its documentary investigations have helped place a new look and bring to life a myriad of different stories, which includes freeing innocent people from prison, being a catalyst for social change and righting wrongs. It is American television’s most acclaimed long-form news and current affairs series that has won every major journalism and broadcasting award, which includes 93 Emmy Awards and 24 Peabody Awards.

Juneteenth is the oldest celebrated commemoration of the ending of slavery in the United States. From its Galveston, Texas origin in 1865, the observance of June 19 as the African-American Emancipation Day has spread across the United States and beyond. Today Juneteenth commemorates African-American freedom and emphasizes education and achievement.
News media contact: Kenneth Mullinax, 334-229-4104.
###