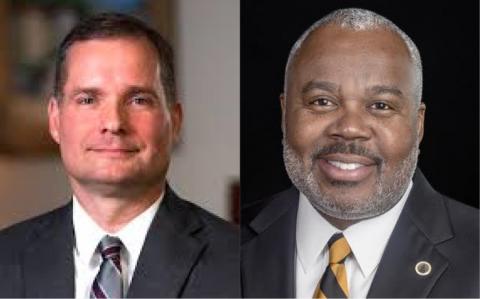 ​Jeff State's President Brown (L) & Alabama State's President Ross.
By Kenneth Mullinax/ASU
.
The Presidents of both Alabama State University (ASU) and Jefferson State Community College (Jeff State ) will execute a Memorandum of Understanding (MOU) at a joint news conference on Tuesday (March 3), at 11 a.m. on the campus of Jeff State at its Shelby-Campus in Birmingham. Its purpose is to announce and conclude an agreement that provides a pathway that will benefit Jeff State's students and both schools.

Both ASU President Dr. Quinton T. Ross Jr., and Jeff State President Dr. Keith Brown will sign an MOU to formalize the agreement that will be positive news for students.
Details of the agreement will be released at Tuesday's news conference.
Tuesday's news conference will take place at Jeff State's Shelby Campus in its Health Science Building, room 156, which is located at 4600 Valleydale Rd., Birmingham (in the Inverness area).