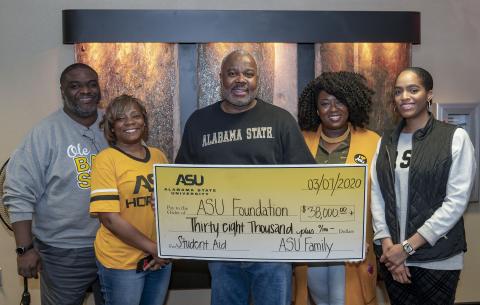 We did it! Thanks to  generous support of alumni and friends of Alabama State University, ASU raised more than $38,000 during its #IGave2020 Campaign.

The campaign, which was formally announced on Feb. 7 and ended March 7, reflects a trend of universities and colleges increasingly seeking and receiving donor money as state funding for higher education fails to keep up with growing costs  for many institutions.

“Our goal was engagement,” said Jennifer Anderson, director of Development. “We wanted to engage 1,867 people to give $20.20, which would amount to $38,000. The money is designated for student aid, which we hope to close several gaps.”

The University worked to engage students, alumni and longtime supporters and even those unaffiliated with the university in the fundraising efforts.

“Truthfully, we could not do this without our donors. We, and those we serve, sincerely appreciate their generosity,” said Anderson. .

Anderson observed that people understand the need for philanthropy and said ASU is happy that the #IGave2020 donors joined the University as partners in reaching its goal.

“Our mission continues because of dedicated donors,” Anderson said. “The campaign has taught us so much about the spirit of Hornet Nation. This campaign is just the beginning. We have many more miles to go but we definitely know we have people who are willing to travel the distance for student success.”

Anderson extended the University’s gratitude again for donors’ engagement and encouraged people to continue to make an investment in the University in three convenient ways:

1. Cash App $ASUF (include your full name in the memo line)

The University will soon release an impact report of the #IGave2020 Movement.