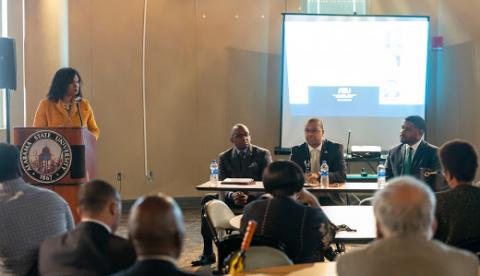 On Tuesday, Feb. 18, Federal Communications Commission Commissioner Geoffrey Starks led a panel discussion on “The State of Broadband Access in Alabama” on the campus of Alabama State University.

The event was sponsored by ASU’s College of Liberal Arts and Social Sciences and the University’s Department of Communications.

The event brought together lawmakers, employers, business leaders and representatives from AT&T and Alabama Power to address regional inequalities impacting the state and solutions for closing the digital divide and increase high-speed broadband access to all in Alabama.

Joining Starks on the panel were State Senator Bobby Singleton, an ASU alumnus, who serves as the Senate Minority Leader of the Alabama State Senate, and Selma's Mayor Darrio Melton.

This community engagement discussion comes as Alabama community leaders and Legislators have put forth efforts to address the state’s connectivity challenges.

Starks noted that broadband access is necessary if we truly want to empower our communities in this digital age.

“High-speed broadband has become as necessary for participating in our economy, society, and democracy as electricity or roads,” said Starks, who served in the Obama Administration. “It has become a necessity for much of our day-to-day lives.”

Starks noted that this technology should be treated as something no community can live without,  adding  that for libraries, schools and universities, health clinics, businesses and hospitals, broadband is a basic need.

He explained that broadband is an important tool for expanding educational and economic opportunities for consumers in remote locations; that broadband makes "telemedicine" possible -- patients in rural areas can confer online with medical specialists in more urban areas and share information and test results very quickly; and broadband helps individuals efficiently access and use many reference and cultural resources via the Internet.

Broadband also is important to universities, such as ASU. It allows students to take advantage of many distance learning opportunities, like online college courses and continuing or senior education programs.

“High-speed internet has become our modern encyclopedia. By using these technologies, more educators have begun to change the way we think about educational process and improving education for their students,” said Melton.  “That’s why I think we have to be intentional that HBCUs receive the funding so our sons and daughters have the opportunity to gather those skills. So, as we have this conversation about broadband, HBCUs funding should be a part of it.”

Fiber optic network, Singleton said, creates a level playing field so that HBCUs and other institutions can compete with the rest of the world.

“The generation that we are in today, broadband is a must. It’s a utility, just like water, sewer or highways,” said Singleton. “In order to shore up universities’ broadband access, such as Alabama State University, we must be wired up to have dedicated lines for research. We now have to take all the service on the same line that students are using.  States around us already have that dedicated line and that is something we must do in the state of Alabama in order to have our students compete in a global market.”

Singleton acknowledged that HBCUs, especially teaching universities such as ASU, will have to start looking at what the new tools are being used in education.

Starks agreed. “HBCUs have a critical role to play, both in terms of making sure that the next generation of coders and technologists are coming from institutions that have a diverse perspective.”

“The longer communities exist without adequate access to broadband, the more we will see it

effect the fabric of America – our economy, the health of our communities, our well-being as a country and the individual dignity of those who live outside of the most connected communities,” Starks said.

By advancing more affordable internet connections, Starks said all Americans can have access to high-speed broadband.

“We need to start to come up with an affordable option for a lot of Americans…so Americans can say that’s worth it for me to get that connectivity to my home to my apartment, to where I live.”

Starks noted that today, African-American homes generally are 50 percent less likely to have broadband in their homes than their white counterparts.

“Having an affordable option is absolutely critical,” Starks added.