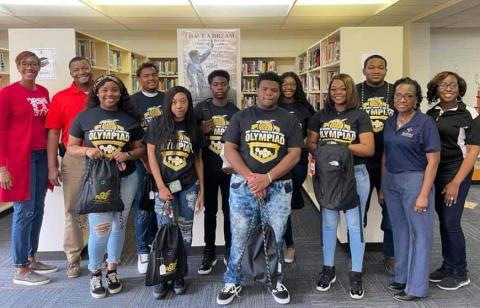 - Sponsored by ASU's Center for Leadership and Public Policy and the College of Science, Technology, Engineering and Mathematics

High school students from nine public and private schools came together recently for the 2021 Alabama State University Virtual Olympiad that was held in three separate events — a recruiting fair, math Olympiad and the awards ceremony.

The event was organized by ASU's Center for Leadership and Public Policy (CLPP) and the University's College of Science, Technology, Engineering and Mathematics (C-STEM). The awards were given in seven different categories that ranged from overall outstanding participation, honorable mentions and a first place winner in the math competition and other categories of winners; according to one of the event organizers, Myles Mayberry III, the executive director of CLPP and host of the Olympiad.

"At a time when circumstances preclude having high school students visit our campus on recruiting tours and for our annual Olympiad competition not to be held in-person due to COVID-19 precautions, this year's ASU Virtual Olympiad enabled potential ASU students an opportunity to still meet the University's faculty, staff and department instructors in a live environment, have a virtual tour of the ASU campus and engage in scholarly competitions," Mayberry said.

Mayberry shared that even though the competition was held for the first time in a virtual format, it was a great opportunity to engage high school students with the University and showcase ASU’s state-of-the-art facilities and its outstanding faculty.

"The ASU Olympiad also offered the University's faculty an opportunity to meet potential ASU students, even if it was online, and recruit for their departments and fields of study in a positive and proactive way," Mayberry added.

The Olympiad's organizers were pleased to have such a diverse array of private and public schools from a large geographic area take advantage of this year's event, despite the altered format due to the coronavirus pandemic, according to Louis Hines, CLPP's director of the event.

Hines said that the students and teachers who participated expressed how they appreciated how interactive and realistic some of the virtual portions of the Olympiad were held. Students especially enjoyed the virtual tour of ASU's campus, which was due to the hard work of ASU's Dr. Cadavious Jones in the Mathematics and Computer Science department.

"Many extracurricular activities were abandoned during the pandemic so the ASU Virtual Olympiad provided high school students with the opportunity to represent their schools and compete against their peers," said Hines.

ASU's Jones concurred with Hines and stated that students continue to see athletic events take place in some form or fashion, so it was a positive example for these students to be able to compete in a scholarly event.

"The students who competed in this format desire to do the same as any other students involved in competitions so they may showcase their skills and ability as they perform at a high level," Jones commented.