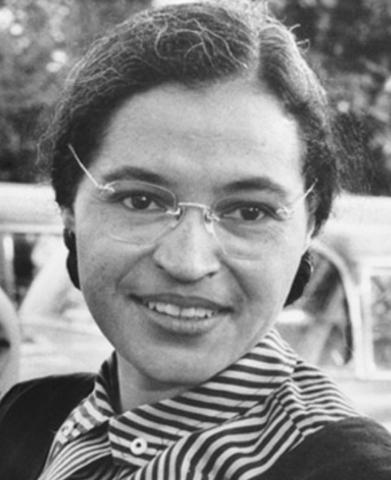 Rosa Parks, an American hero and the mother of the Civil Rights Movement.

ASU Joins in Montgomery’s Celebration of the 66th Anniversary of Rosa Parks’ Historic Stand for Freedom with a Series of Events.

- The Fourth Annual Rosa Parks Day celebration will be held Dec. 1 and Dec. 4, honoring the mother of the modern Civil Rights Movement.

Alabama State University joins other community organizations in honoring the "mother" of the modern Civil Rights Movement, Rosa Parks. The University will participate with others in the Fourth Annual Rosa Parks Celebration, which is a series of events held on Dec. 1 and Dec. 4 to remember Parks’ heroic action taken on December 1, 1955, when she refused to give up her seat to a white man on a segregated Montgomery City bus to protest injustice and inequality.

"ASU’s involvement in this celebration is in keeping with the University’s history of participation in the Civil Rights Movement, particularly the Montgomery Bus Boycott,” said Dr. Quinton T. Ross, Jr., president of Alabama State University. "Mrs. Parks’ name is synonymous with that pivotal moment in the history of the United States since her actions served as a catalyst to ignite the year-long Montgomery Bus Boycott that historians note was the seminal birth of the modern Civil Rights Movement in the United States. Rosa Parks Day helps to keep alive not only her memory, but also the continuing fight for equal justice in this country."

Ross explained that the Fourth Annual Rosa Parks Celebration will take place in Montgomery thanks to the action of the Alabama Legislature, which in 2018, voted to designate Rosa Parks Day on Dec. 1.

On Dec. 1, the celebration begins with the Rosa Parks Day Unity Breakfast from 7:30 a.m. – 9:00 a.m. at the Saint Paul AME Church's Fellowship Hall, which is located at 706 E. Patton Ave. The audience will reflect a diverse group, including elected officials, military, business and community leaders, as well as the general public. The speaker is Troy University's Michael Jackson.

Later in the evening on Dec. 1, from 5:30 p.m. – 6:30 p.m., the Rosa Parks Day Unity Rally & Walk will be held. It begins with an old-fashioned civil rights rally at the Dexter Avenue King Memorial Baptist Church and concludes with a Unity Walk down Dexter Avenue led by Rev. Cromwell Handy (pastor, Dexter Avenue King Memorial Baptist Church and the director of ASU's National Alumni Association); Rev. Courtney Meadows (pastor, Hutchinson Street Missionary Baptist Church) and Rev. Dr. Agnes Lover (pastor, St. Paul AME Church). They will lead the attendants at the brief rally to the site of Parks’ historic 1955 arrest, which is the present-day location of the Rosa Parks Library and Museum where a prayer vigil will follow.

At 7 p.m., the activities will conclude with the Rosa Parks Day Community Convocation - an awards program - that will be held at Parks' home church, Saint Paul A.M.E. Church. The awards will be presented to those who are recognized for their leadership and commitment to civil rights, voting rights, voter education or overall civic service to the citizens of Montgomery. The event is open to the general public.

In addition to the Rosa Parks Day activities on Dec. 1, this year’s celebration is expanded to include educational forums that will be held on Dec. 4 at Saint Paul AME Church with special assistance provided by the Montgomery Improvement Association (MIA), which is the historic organization that was created after Parks' arrest to provide the leadership for the 1955 - 1956 Montgomery Bus Boycott.

December 4 is a day of educational forums beginning at 10 a.m. and concluding at a program to be held at noon, which include:

* A 10 a.m. event at Saint Paul AME Church, where participants will engage in workshops on mentoring and community leadership.

A statewide youth essay competition is also being held to recognize Parks' heroic feat with cash awards being given to the winners. The contest was launched in October and winners will be recognized and awarded on this day. The topic of the essay was “Educating, not Indoctrinating: Critical Race Theory, Your Point of View.”

REFLECTIONS - MEMORIES FROM PARTICIPANTS & LEADERS OF THE BUS BOYCOTT MOVEMENT

An event called "Reflections: The First 5 Days, December 1 – 5, 1955" is being held that will feature participants from the Montgomery Bus Boycott and the civil rights movement offering reflections about the organizational structure, the call to leadership, the cause for social change and other topics of discussion.

Also storytelling about Rosa Parks, E. D. Nixon and Dr. Martin Luther King, Jr. will take place on Dec. 4, by Joseph Trimble with the Alabama State Council of the Arts.

ASU's archivist and historian, Dr. Howard Robinson, explained that Alabama State University played a pivotal and impactful role in the birth of the civil rights movement. The University was closely associated with the success of the Montgomery Bus Boycott, particularly since most of the boycott’s leaders and organizers were ASU alumni, employees or students.

"Back all the way to the 1950's, Alabama State was called 'The Heart of the Civil Rights Movement' rightly so, because of the large number of faculty, staff, students and alumni who were among its earliest and hardest proponents," said Robinson. "Many members of the Women’s Political Council, led by ASU professor Jo Ann Robinson, were members of the ASU family and they followed Rosa Parks' example and organized the successful Montgomery Bus Boycott from the basement of ASU's Councill Hall by designing and mimeographing thousands of flyers calling for the Boycott and coming up with a plan to make it happen. Well, their plan, under Robinson's leadership and Parks' deed, did happen; aided by such things as the legal leadership of ASU alumni Fred Gray (ASU 1951) and Rev. Ralph David Abernathy (ASU 1950). They, working in tandem with Dr. King, Rufus Lewis, E.D. Nixon and others, eventually ended segregated buses in Montgomery and contributed to the forthcoming civil rights movement victories, which helped give African-Americans the freedoms they have today.

"So the connection of the Montgomery Bus Boycott, Rosa Parks, Dr. King and others is historically and appropriately linked to Alabama State University. This is why it is important that we all come out and honor their bravery on this remembrance of Mrs. Parks’ action with the events scheduled for Dec. 1 and Dec. 4," Robinson stated.