ASU to Honor Local Soldiers Who Served in World War I 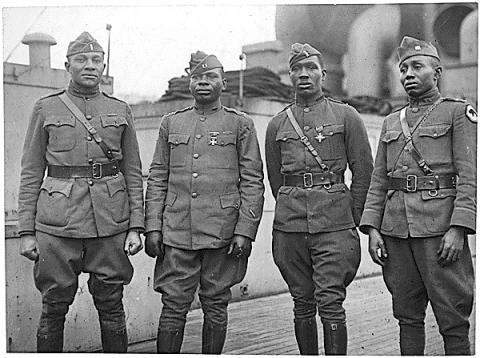 ASU to Honor Local Soldiers Who Served in World War I

Alabama State University will hold two events that honor the 100th anniversary of the Allied victory of World War I, and the Black soldiers from both Montgomery and ASU (then named The State Normal School) who served and fought in The Great War, which includes five ASU graduates commissioned as lieutenants in the U.S. Army's first-ever Black officer's training school.

To coincide with the 100th anniversary of victory over Germany and its allies (Nov. 11, 1918), Alabama State University is hosting these two ceremonies with the first one taking place at 10 a.m. and the second one occurring at 3 p.m.

“This World War I 100th anniversary is a time to honor and remember the many Black soldiers that fought in the Great War who were both residents of Montgomery and students at Alabama State University, as well as all of the men and women of all races who have fought for, and in some cases given their lives, in defense of these United States,” said Dr. Derryn Moten, chair of ASU's Dept. of History and Political Science, and organizer of the commemoration.

Attendance is free to both events, and both are open to the public.

The first ceremony begins at 10 a.m. at Montgomery's Old Oakwood Cemetery (directly across from the Montgomery Police Dept./not the newer portion where Hank Williams is buried) at the graves of Montgomery's Black World War I veterans  who served in the 92d Division (segregated) and were members of the 366th Infantry of the American Expeditionary Forces. Staff will be present to guide you to the ceremony's location.

The second ceremony will be at 3 p.m. on campus near ASU facilities building's 1 and 2 for the unveiling of a Historic Marker that commemorates both ASU and Montgomery's Black World War I soldiers just days before the 100th anniversary of the end of the war in 1918. A host of ASU officials will be present as the marker is unveiled, and prayers and words will be said in a brief ceremony to honor those gallant men from Montgomery and ASU who fought for liberty in France from 1917 - 1918.

The United States officially entered World War I on April 6, 1917 and the war was ended on Nov. 11, 1918 with victory over Germany and its allies.

More than 350,000 Black soldiers served in segregated units during World War I with several units seeing combat alongside French soldiers fighting against the Germans and their allies. Some units also served as support troops, and 171 Black soldiers were awarded the French Legion of Honor, which is the highest award for bravery issued by the French government.