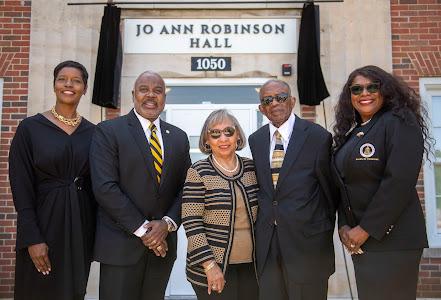 The legacy of one of Alabama State University’s civil rights legends will continue on through the renaming of a historic campus residence hall.

On Tuesday, April 19, ASU celebrated the dedication of Jo Ann Robinson Hall, located at 1050 Tullibody Drive. The ceremony was held in front of the residence hall, a historic building that was previously named after Alabama’s 39th Governor, David Bibb Graves, who held a leadership position in the Ku Klux Klan. The building had carried Graves’ name since 1928.

In 2020, ASU removed the name of Bibb Graves from ASU’s oldest residence hall, and on September 17, 2021, the ASU Board of Trustees, upon the recommendation of President Quinton T. Ross, Jr., voted unanimously to rename the building. The change was made after research was done to identify campus buildings that bore the names of leaders of racist organizations.

“Today marks a great moment in the history of Alabama State University as we have all gathered to participate in and witness the unveiling of Jo Ann Robinson Hall.  I think it is very fitting that this ceremony takes place today as this past Sunday – Easter Sunday – would have been Professor Robinson’s 11Oth  birthday,” Ross said.

Ross noted that several names were submitted, but the name of Jo Ann Robinson continued to rise to the top.  “Professor Robinson was one of the unsung heroes of the Civil Rights Movement, but today we are here to sing her praises and to let the world know that Jo Ann Robinson’s name deserves to be honored along with the other icons with which we are all familiar, many of whom, like Professor Robinson, held significant ties to this great University.”

The ceremony attracted members of the ASU community, Board of Trustee members, local and county dignitaries, as well as friends and supporters of the University.  Featured speaker and Robinson’s close friend and fellow activist, internationally recognized civil rights attorney Fred Gray, was among those who spoke about Robinson and her legacy.

“I met Jo Ann while I was a student here from 1948 to 1951.  We became partners in destroying segregation in Alabama. She played a pivotal role in the successful desegregation of Montgomery buses,” said Gray, whose leadership and legal counsel played a crucial role in the Montgomery Bus Boycott. “The two of us planned the Montgomery Bus Boycott in Jo Ann’s living room…. Not too many know that many activities that impacted the Civil Rights Movement in Alabama occurred at Jo Ann Robinson’s house…We both knew there were risks involved, and we were willing to accept the risks,” Gray said. “…If she had not done what she did and been insistent on it, there would have been no Montgomery Bus Boycott at that time.”

Gray, who is an ASU alumnus (’51), noted that Robinson’s leadership in organizing a city bus boycott in 1955 changed the course of civil rights in America.

“She played a significant role in helping to improve conditions for African Americans in Montgomery. Mrs. Robinson is prominently mentioned for the work that she did in planning and executing the Montgomery Bus Boycott in a new book “Alabama vs. King”…to be published on May 24, 2022. I thought so much of Mrs. Robinson's role in the Montgomery Bus Boycott that I  included her accomplishments in  my memories “Bus Ride to Justice.” So, thank you Mr. President for honoring Mrs. Jo Ann Robinson by naming this facility Jo Ann Robinson Hall. You do the name and legacy of Jo Ann Robinson and this University proud by giving honor where honor is do.”

A special drawing of Professor Robinson was created during the dedication ceremony by local artist Kevin King, director of the King’s Canvas in Montgomery. The artwork will be on display initially in the foyer of Jo Ann Robinson Hall and will later become a feature in the Jo Ann Gibson Robinson exhibit in the Levi Watkins Learning Center.

Ross recognized not only those who had a part in today’s celebration but also Robinson’s cousin, Dr. Sheree Finley, who is an ASU professor. “On behalf of the Board of Trustees, the faculty, staff, students and alumni, I would like to present this framed design to you in memory of today’s unveiling. It is a replica of the design that has been hung in the foyer of Jo Ann  Robinson Hall.”

The celebration culminated with the unveiling of Jo Ann Robinson’s name that is affixed to the historic building. The unveiling was met with a thunderous round of applause.

was a freshman in 1986  when she left Chicago and moved into the all-female  Bibb Graves residential Hall.

“I have fond memories of my stay in Jo Ann Robinson Hall from 1986-1987.  New name. Same memories. I met my future husband as a freshman at Alabama State; he was a senior.  He used to toss pebbles at my dorm window to get my attention; back then we didn’t have cell phones. Bibb Graves Hall, which is now named  Jo Ann Robinson Hall, is the place where we established our friendship which ultimately turned into a relationship, and then marriage. Thirty-five years later, we have two daughters, Ashley and Kimberly, who graduated from Alabama State University and who also stayed at Bibb Graves Hall. So, it’s the memories for our family, to have all of us attend and finish Alabama State University,” Thomas said.

Thomas was excited to attend today’s renaming celebration.  “I told myself I have to make it to the place where I met my husband,” a smiling Thomas said.  “I am also excited to see what has happened to a name that was once Bibb Graves Hall. I celebrate that it is now Jo Ann Robinson Hall. It’s quite sentimental for me right now to just know what we have gone through to get the name changed and ….how we can now eloquently say that it is the Jo Ann Robinson Hall, which is named after an activist for civil rights.   I celebrate the name change. It means so much.”

Jo Ann Robinson was a professor of English at Alabama State University during the 1950s. She became an impactful civic leader in Montgomery, particularly as a member and later as president of the Women’s Political Council (WPC), an organization that fought for voting and women’s rights.

Robinson became a key figure in launching and executing the Montgomery Bus Boycott. On December 1, 1955, after the arrest of Rosa Parks for refusing to give up her seat on a city bus, Robinson—along with John Cannon, chairman of the Alabama State College business department and a few of Robinson’s students—created and mimeographed 35,000 leaflets that were distributed throughout the Montgomery community to alert residents to boycott the city’s transportation system.

The successful yearlong boycott led to the desegregation of Montgomery city buses and became a foundational event in the modern Civil Rights Movement.