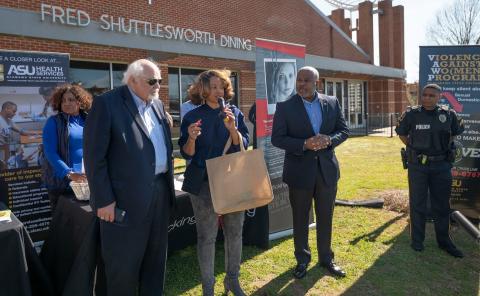 The event, which was free, was sponsored by Regions Bank, ASU's VAWP and the University's Title IX Office.

ASU President Quinton T. Ross Jr. said contrary to popular opinion, human trafficking and stalking occur in the U.S. as well as in other countries, and it’s a growing problem.

"It not only destroys the lives of those victimized, but also destroys countless families and poses a direct threat to the security and well-being of the entire world,” Ross said in front of the ASU's Fred Shuttlesworth Dining Hall.  “I’m very excited that our institution has taken steps forward to ensure that our students are aware and our community is aware of this very important issue. Watch out for one another and don’t be afraid to report things that don’t seem right.”

Students and dignitaries attended the event, which included music and information booths.  The event also included a giveaway of a female and a male bike, which were donated by Regions Bank.  To win the bikes, students had to donate $1 to mount the stationary bikes and then read aloud information on the two topics.  Participants’ names went into a drawing for the win.

To show how it should be done, Ross mounted the male bike and read informational tidbits on the topics, but not before he donated $20 to the cause.

Addressing the crowd was a representative from U.S. Sen. Doug Jones’ Office in Huntsville, Rick Tate.

“Sen. Jones is very focused and compassionate about human trafficking in this country,” Tate said. “This is one of his priorities. He wanted to ensure someone from his office was here to let ASU know that his office appreciates ASU spotlight this important issue.”

Montgomery Circuit Court Judge Brooke Reid told the crowd by the time a domestic violence case is before her there is always a victim involved.

“If we can focus on prevention and what we can do to raise awareness, we come one step closer in the fight,” said Reid.

According to Cheryl Lang, director of VAWP, stalking is also a growing problem.

“We want to ensure our students and the public know how to recognize stalking, how stalking intersects with domestic violence and sexual violence, understanding  protection orders,  and where to go to get resources,” Lang said.

Human trafficking is a form of modern slavery that occurs in every state, including Alabama. ASU's Violence Against Wo(men) Program (VAWP) works closely with service providers, law enforcement, and other professionals in Alabama to serve victims and survivors of violence, trafficking, stalking and to provide resources to victims.

Selling people for sex or for underpaid labor is considered a $150 billion business worldwide. Researchers who study trafficking in Alabama believe that our state is a microcosm of what’s going on in the U.S., which means that human trafficking and stalking is a crime occurring right here in Alabama. Stalking is a crime that is also too prevalent in Alabama and in many cases leads to physical and emotional violence. ASU's VAWP program also is here to assist anyone who feels they may be a victim of stalking. 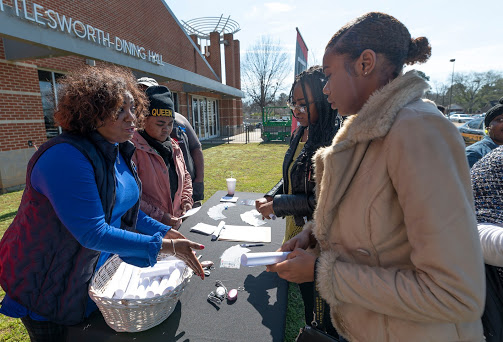