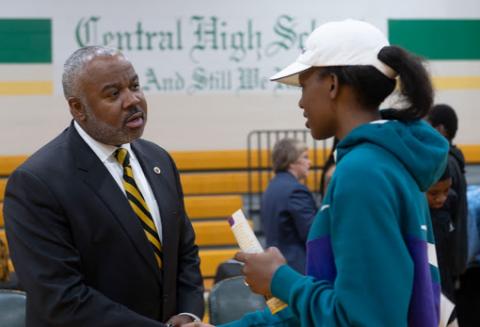 The “Moving ASU Forward with Hornet Pride” President’s Tour ended on an impressive note. The University awarded more than $2 million in surprise scholarships during the tour. That amount brings to more than $5 million the total scholarship dollars awarded in the areas the tour visited. Surprising eligible students with on-the-spot scholarships is a hallmark of the tour.

“As President of The Alabama State University, I feel strongly that we should try to remove as many financial obstacles as possible for students who wish to pursue their dreams,”  President Quinton R. Ross Jr. said.  “ASU still believes education is the greatest equalizer and force for change. These scholarships are ASU’s commitment to help as many dedicated students as possible to earn their degree and take their place as productive members of society.”

President  Ross  said he and the road team (consisting of students, faculty, staff and recruitment advisers) wrapped up a successful two weeks of travel sharing the good news of Alabama State University in towns and cities across the state of Alabama and into the state of Georgia.

In most cities, the team took on dual roles: President Ross and the MOU Team were covered by local media at each venue, signed important Memorandums of Understanding with local community colleges and spoke to alumni at night. The rest of the Road Team visited local schools during the day and attended alumni receptions at night. Schools and reception guests were treated to a production by the University’s Department of Theatre Arts, testimonials from students, updates from President Ross and entertainment, as well as colorful and informative displays featuring each of the University’s colleges.

At every stop, President Ross and members of the Road Team inspired ASU pride as they talked about ASU’s rich history and the great things happening at ASU.

ASU’s offerings of new degree programs, which include a Bachelor of Fine Arts in dance and a master’s in prosthetics and orthotics, and the physical transformation of the campus enticed many to join Hornet Nation.

During the two-week tour, ASU alumni had a chance to interact with administrators and current students, reunite with fellow alumni and learn about some of ASU’s current major accomplishments.

C​hapters of the National Alumni Association served as hosts at most of the evening receptions, adding to the spirited atmosphere of each event. Members also made donations to the University through the Founders’ Day of Giving, #iGave2020 campaign.

The MOU provides a pathway for students who have achieved their two-year or associate degrees to enroll at ASU to attain their bachelor’s degrees.

At each tour stop, President Ross made a great case for why students should choose ASU, an HBCU (Historically Black College and University) established in 1867 by nine freed slaves.

He discussed how ASU played a part in changing the landscape of education by educating generations of African-American students, how the University has ties to civil rights history and talked about the outstanding array of academic programs at ASU.