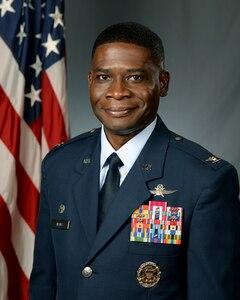 Colonel Terrence A. Adams, an alumnus of Alabama State University’s Air Force Reserve Officer Training Corps Detachment 019, has been nominated by the president for promotion to the grade of brigadier general, United States Air Force.

He is the first Detachment 019 alumnus to be nominated to the rank of brigadier general.

Adams remarked that the leap from Colonel within the Army, Marine Corps and Air Force to Brigadier General, or from Captain to Admiral in the Navy, is by far the most competitive of all promotions.

“When Colonels or Captains take off eagles and put on stars, their lives change. They assume immensely more authority and are held to higher standards of responsibility,” Adams said.

Adams is now the Chief of Strategic Assessments Headquarters Air Force, Pentagon, Virginia. Before this position, he was the Commander of the 628th Air Base Wing and Joint Base Charleston, South Carolina.

Growing up in Tuskegee, Alabama, where his mom, Aretha Adams, served as the source of his tenacious energy and spirit, Adams’ goals and objectives were made possible through strong mentorship and his faith.

“I have been mentored by the best,” Adams said. “They poured love, wisdom and knowledge into me. I feel compelled to pour that into others. I learned leadership skills as the SGA President at AUM, President of my fraternity’s chapter, my AFROTC experience and from being an enlisted member in the Army.”

Adams’s military career started right after high school when he enlisted in the Army as a Private E-1 Food Service Specialist to take advantage of the education and financial benefits.

“I­­­ entered the military because I didn’t want mom working two to three jobs trying to pay for school for me, and I wanted to serve my country,” Adams said.

After serving on active duty in the U.S. Army from 1987 to 1989, Adams returned to his hometown and joined an Army Reserve unit as a cook/dietitian.

“This gave me the opportunity to focus on school, until I received activation orders in support of  Desert Shield/Desert Storm. When I came off activation orders, I went back to school at Auburn Montgomery and joined the AFROTC at Alabama State University. I was commissioned two years later.”

When asked about his leadership philosophy he said it is simple -- Listen. Lift. Love!

“Every person’s thoughts have some relevance. I believe in taking care of people, mentoring and paying it forward, having a strong work ethic, and continuing self-improvement. I also believe in encouraging mutual respect, and one way I like to do that is sharing Airmen’s stories with all levels in the unit, and for leaders to in turn to share their stories with Airmen. This will reduce the standoffish gap between senior leaders and younger enlisted.”

Still Connected to ASU
Adams is currently spearheading an initiative with ASU to establish a Detachment 019 Alumni Chapter and helping to plan the Detachment’s 50th Anniversary this year.­­­­

“I’m on a path to assist. I started that by forming an Alumni Association for the ROTC detachment at ASU with the help of Lt. Col. (ret.) Howard Watkins, Lt. Col. Carina Harrison and Lt. Col. Andrew Hunter, current Commander for Detachment 019.  I’m on a journey to pour more into the detachment and be an advocate for it from the outside because the detachment commander can only do so much. It will take outside influence to assist with the detachment,” Adams said.

Adams pointed out that this a great time to lead and serve and form a partnership with ASU.

“This is an opportunity to catch up with ROTC classmates and others who share the affinity for the program. It’s a time to mentor to young cadets so they can be successful. It’s a time for the detachment alumni to give back…I would love to bring back the first class of commissioned Lieutenants.”

Adams says ASU played a pivotal role in his promotion.

“I do see Alabama State University involved in my success. I was recruited by a young Captain, Steve Harris, who was a recruiter for ASU Air Force ROTC. He told me about all the opportunities that the unit had to offer.  I became a member a week after he talked to me. If it wasn’t for retired Lt. Col. Harris, and my time at ASU, this promotion wouldn’t happen,” Adams said.

About Detachment 019
ASU’s Air Force Reserve Officer Training Corps Detachment 019 was established in April 1971. The first-class graduates received commissions in 1974.  The class of 13 included the first female to receive an AFROTC commission in Alabama, ​Juanita​ Bell.