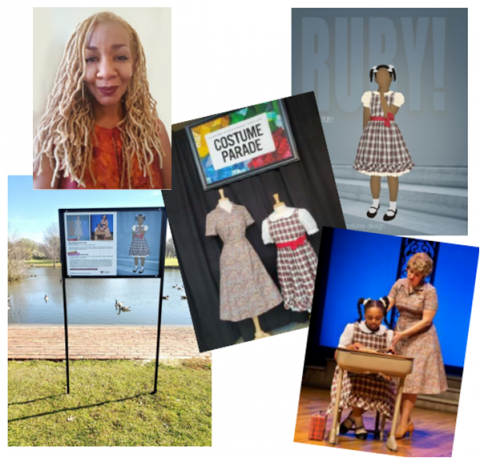 Submitted from The Artsation Newsletter, a publication from ASU’s Department of Visual and Performing Arts

Ramona Fuller-Ward, costume designer in Alabama State University’s Department of Theatre, was recently chosen to participate in the Alabama Shakespeare Festival Costume Parade. Fuller-Ward’s selection was a result of her work on the ASF production of “Ruby: The Story of Ruby Bridges”.

“As a professional producing theater, nearly everything you see on our stages at ASF is made by hand right here in our shops,” said ASF Artistic Director Rick Dildine. “The designs we’ve featured here represent work by incredible designers, artisans and skilled craftspeople who’ve worked in professional theaters all over the country — even the world.”

The designs featured in Costume Parade span some dozen years of ASF production history and include costumes from nearly as many periods in history. From the diaphanous fairy costumes of A Midsummer Night’s Dream, to the WWII military uniforms and kit of All Is Calm, to the Harlem Renaissance finery of Ain’t Misbehavin’, these costumes, alone, represent more than a hundred thousand hours of work.

Rick Dildine and Director of Costume Production Jeffrey Todhunter curated all of the pieces in the Costume Parade.

“Costumes are silent storytellers,” said Fuller-Ward. “Done properly, with intention and purpose, they provide context, transport the audience through time, and speak the unspoken. The ultimate confirmation of my choices came on opening night when the real Ruby Bridges said that the cast accurately reflected her childhood memories.”