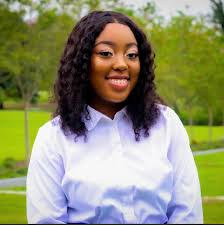 - By Kenneth Mullinax/ASU.
An Alabama State University student who is a communications major was just awarded a cash-scholarship that will enable her to purchase textbooks during her senior year.
Birmingham native Wynter Rudolph, a junior with a concentration in radio & television, won the scholarship from Montgomery's WCOV TV station. Rudolph's paper on how she became interested in radio and television broadcasting and what her future career plans entailed was the major criteria evaluated by the judges.
"I am a rising senior in Communications at ASU and I'm so happy to have won this scholarship which will enable me to buy the books necessary for some of my classes at State," Rudolph said by phone. "I plan on attending graduate school upon my graduation from ASU and would enjoy being employed with a TV station or studio in the capacity of editing and eventually producing both television shows and motion pictures."
Also critical in her winning the scholarship was the recommendation by Dr. L. Simone Byrd, chairwoman of ASU's Communications Department. She believes Rudolph has the intellectual capacity and the drive to succeed in her chosen profession.
"All of us in ASU's communications family are extremely proud of Wynter and her having received this scholarship," Byrd said. "In the time that I have known her, she has been a student who is eager to learn as much as possible and uses her instincts to position her course work in a strategic, career-focused manner."
###