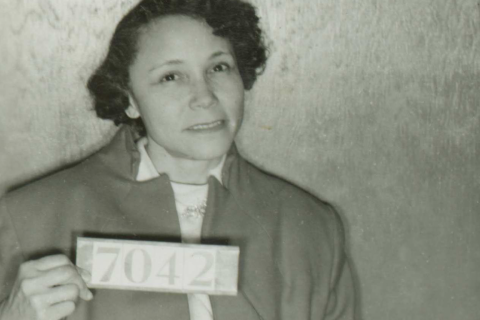 The name Jo Ann Robinson is hailed at Alabama State University as being symbolic of the courage and fortitude that was characteristic of those who were the catalysts behind the successful 1955-56 Montgomery Bus Boycott.

Robinson’s former hometown, Culloden, Georgia, recently honored her with a Georgia Historical Society marker, highlighting her significant contributions to the Montgomery Bus Boycott, a movement that some historians describe as the seminal birth of the modern civil rights movement.

The marker acknowledges Robinson’s courageous actions just after Rosa Park’s historic arrest for refusing to give up her seat on a segregated city bus to a white man.

According to Robinson’s cousin and current professor of chemistry at ASU, Dr. Sheree J. Finley, the effort to erect the marker took nearly two years from the start of the project until its unveiling on June 16.

"It gave me a chill both personally and also on behalf of our University to know that my cousin Jo Ann, who was a leader in the Women's Political Council (WPC) here in Montgomery, was so honored in her hometown because of the leadership position she took in working with others here on the Alabama State University campus to organize and carry out the first boycott of Montgomery's segregated buses that took place just a few hours after Mrs. Parks arrest," said Finley.

With Rosa Parks' permission, Robinson led others to work throughout the night of Parks' arrest (December 1, 1955) in a basement room in Alabama State University's Councill Hall, to write and mimeograph (copy) 35,000 handbills calling for a boycott of the Montgomery city bus system. The flyers encouraged residents to refuse to ride the buses until city officials put an end to the system’s segregated policy that made black riders move to seats in the back of the buses, so that white riders might sit in them. On the next day (Dec. 2) Robinson and fellow WPC members, joined by Rev. Ralph David Abernathy (ASU Class of 1950) and two of her Alabama State senior English students, passed out the handbills to high school students as they left school. Robinson was a key figure in the leadership of the successful boycott that just a little over a year later ended the Jim Crow segregation policy on Montgomery's city buses and opened the door for America's modern civil rights movement.

The ASU professor’s role in the movement was so significant that Dr. Martin Luther King, Jr. mentioned her in his memoir of the boycott: "Apparently indefatigable, she, perhaps more than any other person, was active on every level of protest."

Finley stated she is proud to be on the same faculty (ASU) as was her famous cousin and believes that the marker pays homage to Robinson’s historic actions of the past, as well as the work of current faculty members to teach students more than academic subject matter.

"As an ASU faculty member and a relative of Jo Ann Robinson, I feel this historic marker not only honors what Robinson did in 1955, but also uplifts the spirit that she and countless other faculty members did then and continue to do now that both educate our students in academics, yet also educates them with the rich heritage of freedom, equality and justice which is passed on by members of the faculty to their students," Finley stated. "I feel this recent honor tells our students and the Hornet Nation family that our faculty were then in 1955 and are still committed today in 2021 to furthering the moral foundation of our students and the community in which we live. This is evidenced by what she and fellow faculty members such as Mary Fair Burks and Thelma Glass did in 1955, and that is still alive and well, as evidenced every time President (Quinton T.) Ross calls for all of us to be involved in furthering what he calls CommUniversity."