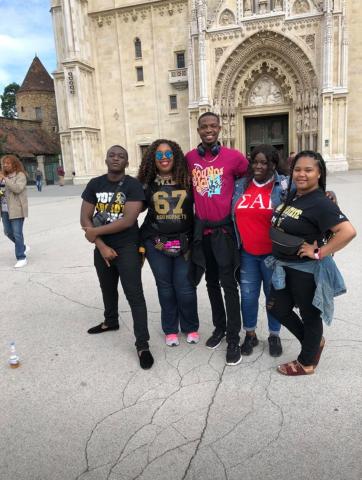 Four Alabama State University music majors, along with their mentor, Dr. Cordelia Anderson, assistant professor in the Department of Music, represented the University during a weeklong performance and tour of the nation of Croatia.

The seven-day tour consisted of 10 concerts in seven prestigious locations across Croatia, including the historic cities of Dugo Selo, Slavonski Brod, Ogulin, Daruvar, Petrinja, Vrbovec, Dubrava, and its capital - Zagreb.  The choir performed classical and gospel music as part of the group "Alabama Sounds of Joy" (ASJ), which originates from Tuscaloosa County.

“We were in the need of fresh new members to travel with, so I suggested my students, whom I work with at ASU,” said Anderson, a member of ASJ.  “They added the ‘life’ that was needed to make our mission complete.”

Anderson said one of the capstones of the tour was the students gaining a deeper understanding of the historical and cultural context of Croatian music.

“Croatia has a rich cultural heritage that is expressed through traditional music, dancing and costumes,” Anderson said. “The students learned a greater appreciation for the choral art form as the universal language.”

Before their Croatian departure, the student singers rehearsed for several weeks.

“There were rehearsals that were scheduled for twice a month to prepare the music,” Anderson said. “Our rehearsals were led by ASU Department of Music alum Jimmy Morris, Jr.”

“I was initially nervous about being away from home for so long; however, I realize it is truly a blessing to be able to share the love of Jesus Christ throughout the world, Mitchell said.”

The music major said a trip abroad of this magnitude gives immeasurable lessons.

“My greatest lesson is the spirit of gratefulness,” he said. “Many Croatians do not have half of the things we are blessed to have in the United States."

For music students thinking about taking their music internationally, Mitchell advised them to “be prepared to try new things, don't be afraid to talk to people, and use common sense and good judgment.”

He thanked his mentors and his parents for encouraging students to do their best and most importantly, he thanked “God Almighty.”

“They are great mentors,” he said. “The entire faculty strives to make sure you have everything you need to be successful.”

Anderson said traveling abroad is a rare opportunity to fulfill a dream.

“I’m so grateful that my students were able to experience such an amazing tour of this caliber. It really gave them a dose of what the ‘performer’s life’ is all about,” Anderson said. “The 10 different concerts in seven different cities really shaped their mindset of being a professional performer. The tour was indeed life-changing for them.”