ASU Celebrates Culture Through Cuisine at its Taste of India & Nepal 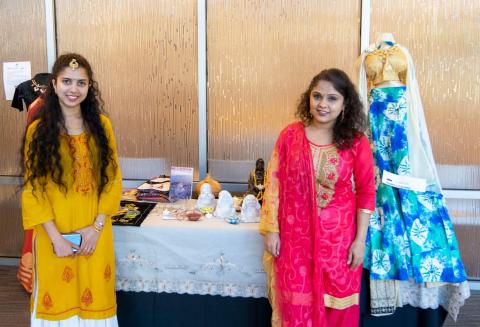 The International and Diversity Affairs Department at Alabama State University sponsored its first-ever Taste of India & Nepal recently at the John Garrick Hardy Student Center and although the event is titled the Taste of India & Nepal, there were other countries whose culture was highlighted at the celebration.

India and Nepal's neighboring nations of Bangladesh and Pakistan were also represented at the event, which garnered praise from those who attended it.

ASU faculty members and students were able to taste the nation's authentic cuisines and also had the opportunity to experience those countries’ culture through music and colorful attire with all participants receiving information on each country represented.

“This is a great opportunity to give individuals a chance to learn more about these countries,” said Debora Jones, staff member of the International and Diversity Affairs Department.

The turnout was great as many students showed up to experience the different things they had to offer at the event and especially to sample the food.

One attendee, Rachana Bandid from Nepal, said she wants students to know about her nation's culture and what it has to offer.

“This event gives us all a sense of how my culture can be seen and experienced right here at ASU,” Bandid said.

Another Nepalese student, Anupa Ghirmire, who is a senior majoring in pre-med, said she was elated that her country was represented at the University's celebration of diversity.

“There are roughly 25-million people who reside in our country and there are festivals happening all the time throughout the countryside, which are mostly celebrations of some sort," said Ghirmire. "Many women wear a sari, which is a staple of clothing worn in Nepal. It is wrapped usually on top of a blouse while men wear a garment that is similar to a robe," she added.

Overall, the event was well received with all who attended it expressing how it enlightened them as to how people live and celebrate life in the far-away lands of India, Nepal, Bangladesh and Pakistan.