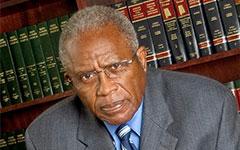 Alabama State University's National Center for the Study of Civil Rights and African-American Culture at will celebrate the 63rd anniversary of the Montgomery Bus Boycott (the seminal birth of the modern civil rights movement) on Dec. 3, at 6 p.m. at the historic First Baptist Church in Montgomery.

The event is free and open to public and is part of the National Center’s Ralph D. Abernathy Civil Rights Lecture Series titled “The Mass Meetings of the Montgomery Bus Boycott and the Awakening of Black Militancy.” Rev. Abernathy was once the pastor of the church where this year's celebration will occur.

The special tribute on Dec. 3, acknowledges all of the Montgomery Bus Boycott leaders including the event's speaker, Fred Gray (Alabama State University, Class of 1951) who was an attorney for Rosa Parks, Dr. Martin Luther King, Jr. and a legal advisor for the civil rights movement.

ABOUT FRED GRAY
Gray, a native of Montgomery, Ala., is one of the nation’s most respected and accomplished civil rights lawyers. His law career extends over six decades (he is still active today) and includes representing Rosa Parks when she was arrested for giving up her seat on a segregated bus to a white man, which was the profound act that initiated the nation's civil rights movement. He also represented Dr. King, and many of the most important legal cases of the civil rights movement.

The event is sponsored by ASU's National Center, The Montgomery Improvement Association and The Dexter Avenue King Memorial Baptist Church.