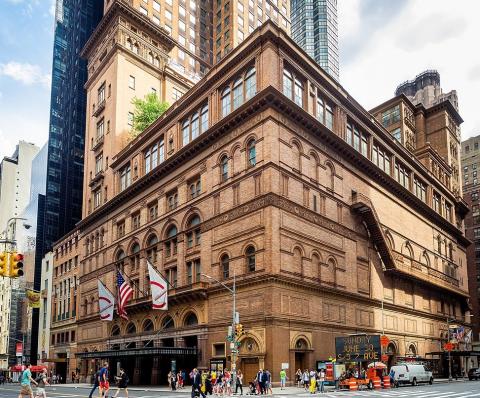 - It is one of the world's most important musical destinations for Popular and Classical Music.

One of the world’s most historic musical locations has invited the Alabama State University choir to perform on the Carnegie Hall stage as part of its guest conducting engagement series.

ASU's director of Choral Activities, Dr. Kristofer Sanchack, received an invitation from the venerable institution asking the University's choir to perform under his direction during the guest series in May of 2023. Located in midtown Manhattan in New York City, Carnegie Hall has featured stellar performances by artists representing the spectrum of musical genres in its 130-year history: from Tchaikovsky to Dvořák and George Gershwin to Billy Holiday and the Beatles.

Now, ASU will be listed among its performers.

"I was absolutely beyond excited when I read the invitation from Carnegie Hall inviting me and our University Choir to perform at it," said Sanchack, a four-year veteran at the University.

THE HONOR GOES TO THE UNIVERSITY

Sanchack stated that it is always exciting news when musical professionals within an institution like Carnegie Hall recognize the great job that the ASU Choir has done in its performances.

"This is more importantly an accomplishment and an honor for Alabama State University, the College of Visual and Performing Arts and our University Choir members. It is all a combined team effort and all are to be complimented," Sanchack stated.

ASU's musical maestro said that he plans to boost the choir’s numbers for the performance by inviting selected talent from ASU faculty and area high schools, as well as 12 professional string instrument players to add to the University’s orchestra. He said the ASU choir will have approximately 60 members in its Fall 2021 class.

"We need to have about 120 performers with us to do justice to its (Carnegie Hall’s) huge performing arts hall and that includes singers and a 23-piece orchestra," Sanchack said.

He estimates that the choir will need to raise at least $150,000 to make the week-long trip possible.

"We will have days of rehearsals on the main stage and in subsequent rehearsal rooms, the performance, as well as educational visits for our students to the city's famous places such as the Statue of Liberty, The 9 -11 Memorial, Rockefeller Center, the Empire State Building, Times Square and Broadway, to name a few. This will be an experience that our students will cherish throughout their lifetime…they may tell their children that they performed at Carnegie Hall," Sanchack explained.

Designed by architect William Burnet Tuthill and built in 1891; it was named in honor of and built by a donation from one of America's first billionaires, philanthropist Andrew Carnegie. He was the owner of the Carnegie Steel Corporation, which became the U. S. Steel Trust. The Hall is one of the most prestigious venues in the world for both classical music and popular music. Carnegie Hall has its own artistic programming, development, and marketing departments and presents about 250 performances each season. Carnegie Hall has 3,671 seats, divided among three auditoriums. It was designated a National Historic Landmark in 1962.

PERFORMING AT THE HALL HELPS WITH ASU’S RECRUITMENT

Sanchack believes the choir’s performance at Carnegie Hall will be of great benefit for the University.

"This is more than just good for ASU's choir. It is great for our school's name, it will help us attract, recruit and enroll more students and enhance our programs' already good reputation," he said.

"We are going to do a great job at ASU's performance at Carnegie Hall, and we will achieve it (greatness) the same way as described in the joke, which is practicing till we are perfect."