ASU Awarded $763K for its Brewton Campus by Governor Ivey 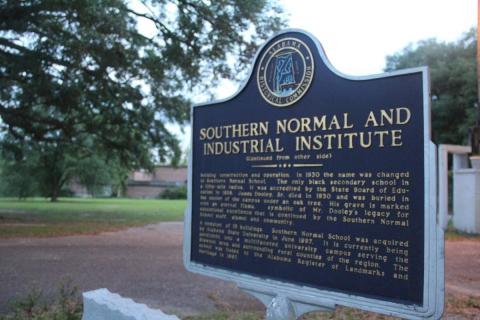 ASU Awarded $763-K for Improvements to its Historic Brewton Campus by Governor Ivey
By: Kenneth Mullinax/ASU

Alabama State University was among five schools that received funding from Alabama's Public School and College Authority Board (PSCA) as was recently announced by Governor Kay Ivey.   ASU received $763,600 of the $23 million PSCA bond issue. The ASU portion is allocated for ASU's historic Southern Normal School campus located in Brewton (Escambia County), which is the oldest African-American boarding school in Alabama. This funding will help provide structural improvements to seven of the buildings located on the school's campus. Other schools receiving funding in this final cycle from the PSCA were The University of Alabama, Snead State Community College, Alabama A&M and Talladega County Schools.   ASU President Dr. Quinton T. Ross, Jr., expressed his appreciation of the allocation of funds. "On behalf of Alabama State University and its Board of Trustees, I wish to wholeheartedly thank Governor Ivey, State Finance Director Kelly Butler and Alabama Superintendent of Education Dr. Eric Mackey who all serve on the PSCA Board for approving the allocation of these funds that will help us stabilize and better preserve the structures located on ASU's historic Brewton campus," Ross said. "The bond Issue that was funded through Senate Bill 242 is a God-send for public schools like Alabama State University, which are able to use these funds toward construction, safety improvements or technology upgrades. My sincere appreciation to the Governor and the members of the PSCA Board." IMPORTANCE OF FUNDING PUBLIC SCHOOL INFRASTRUCTURE PROJECTS Governor Ivey, in her announcement of the allocation of the remaining infrastructural projects that included ASU, explained how necessary these funds are to Alabama's public schools. “These remaining PSCA funds will make needed improvements to our public educational facilities, which will have a lasting impact on future generations of Alabamians," Ivey said in her prepared statement. "I am extremely grateful to Alabama’s retiring Finance Director Kelly Butler for his diligence on this project to ensure we are investing wisely in meaningful education and workforce efforts.” President Ross concurred with the Governor's assessment and thanked all involved in the effort. "I want to thank the members of the Alabama Legislature that supported and funded this initiative, the patrons of SB 242 who wrote the legislation that enabled these improvements that funded these infrastructure awards to ASU and other public schools, and again to Governor Ivey for her positive leadership expressed in supporting this effort that helps build-up our educational infrastructure, which ultimately helps lift-up Alabama's students," Ross stated. News media contact: Kenneth Mullinax, 334-229-4104. ###