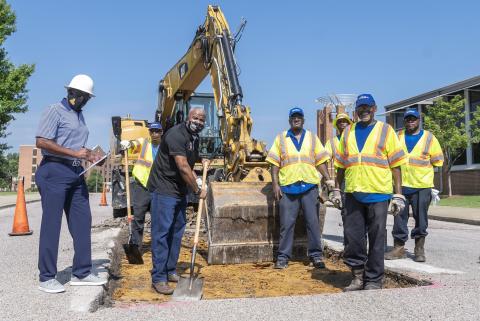 Alabama State University's Division of Facilities and Operations has been working for months, ramping up work on the campus for the scheduled fall reopening.

In addition to ongoing sanitizing processes and beautification projects, the University has launched a major project to resurface most of the streets that run through the campus, as well as several parking lots.

Much of the work will be done near the Acadome, Bibb Graves Hall, South University Drive, Ross-Dunn Drive and Councill Hall.

President Quinton T. Ross, Jr., said the University is able to take on the project at a cost well below the million-dollar price tag because of partnerships.

"This is a big deal," said President Quinton T. Ross, Jr. "We are able to accomplish this initiative by combining our limited resources with assistance from stakeholders and partners, including the Governor’s Office, the Alabama Department of Transportation and the city of Montgomery. We are extremely grateful for those partnerships and connections that are making this effort possible.”

Ross added that the resurfacing project has been in the works for some time.

"When I arrived on campus, we took assessment of the grounds and facilities, as well as asphalt conditions. Asphalt repairs were a priority. A lot of the asphalt on campus has not been touched in a significant way in years. We wanted to do more than patch up holes; our goal is to completely resurface as many areas of the campus as possible," Ross added.

Donald Dotson, ASU’s Vice President for Facilities and Operations, explained the importance of the project.

"This resurfacing project is important for safety reasons. The roads are eroding, and we want to prevent any hazards for vehicles and for students who are walking in certain areas of the campus," Dotson said.

Dotson said the first stage of the project will take six months to complete.

"We hope that a substantial amount of the resurfacing will be done prior to the return of students," Dotson said.

Some of the larger tasks in the maintenance and facilities plan have been completed, including cleaning and sanitizing facilities and overhauling two of the three elevators in C.J. Dunn Towers.

"We have put a dent in our list, but there are some tasks still ongoing, like landscaping improvements across the campus," Dotson explained.

Ross said the work on the University’s physical landscape and the upgrades to campus buildings are signs that ASU is moving forward.

"Doing those things that make a real difference not only improve the quality of life for our students, faculty and staff, but our community as well. We will continue to do all that we can to improve the campus. This is our home and when people look at the campus, they see the gateway to ASU’s soul," Ross said.