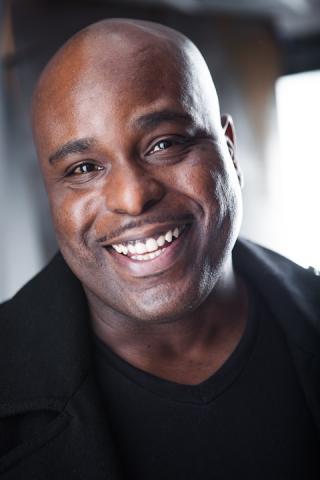 ASU alumnus Jeffrey Bernard Calloway (’97) found his first taste of success as an actor when he joined the cast of ASU’s performance of “Gospel at Colonus.”

Now, the Theatre Arts graduate is performing on stage, film and TV.

Calloway just landed a new role in the BET Plus sitcom “The Ms. Pat Show,” starring stand-up comedian Patricia Williams. He plays the well-intentioned husband on the show.

“My role is about a husband losing his job at a plant in Atlanta. So, I had to move my family to Indiana, where it is mostly white. The kids are trying to get acclimated in their new school, my wife is always going away doing stand-up comedy on the road and I’m basically at home, working and taking care of the house,” he said.

The storyline, based on Ms. Pat’s comedy and memoir, is about the comedian playing a fictionalized version of herself, a former convicted felon turned suburban mom whose hustle and resilient spirit were forged on the streets of Atlanta. She now finds herself in conservative middle America alongside her husband, a struggle of a sister and two distinct sets of kids.

BET Plus picked up the 10-series comedy that previously had a pilot order at Hulu. The pilot was directed by Debbie Allen.

“I think our show will be like the next ‘Cosby’ show, but not as ‘clean-cut,’” he pointed out.

The Washington Post declared the show “unforgiving and darkly hilarious” and the New York Times calls it “brutally honest and outrageous.”

The biggest challenge for Calloway in taking the role is not what one may expect.

“Being away from my family during a pandemic -- my wife, Carmen, who is also in the industry, and my 4-year-old son, Jacob Adam - is a big challenge. That is going to be the hardest part about filming, at least for the first season,” he explained.

The ASU football player turned Broadway, Film and TV star has performed in numerous regional theaters; two Tony Award-winning productions, “Memphis the Musical” and “All the Way”; shared the silver screen with Denzel Washington in the “The Taking of Pelham 123,” his movie debut;  starred in “Man on the Ledge”; starred in the television shows “The Breaks,” “Law and Order,” “Blue Bloods”  and ‘City on the Hill”; and played the Grinch in the 2015/2016 seasons of the Old Globe’s holiday tradition, Dr. Seuss’ “How the Grinch Stole Christmas,” (the first African-American to do so anywhere on the planet), as well many other credits throughout his career.

“I’ve also played Off-Broadway in several shows, including ‘The Good Negro,’ and I do a lot of commercials and voice-overs,” Calloway said.

Of all the wonderful roles he could pick to play, Calloway selected one he played before.

“If I had a magic wand, I would play Boy Willie in ‘Piano Lesson’ by American playwright August Wilson. I would love to play him one more time before I get too old. If I could get the right director and the right actress to play Berniece, I would love to do the play,” Calloway added.

To date, he said his career highlights are his Broadway debut in “Memphis the Musical” (2009), which earned four Tonys, and “The Ms. Pat Show.”

“The Ms. Pat Show” is the special highlight of my career thus far. I’m number two on the call sheet. I’ve never had that position in film or TV.  I may become a household name now because of the show,” Calloway added. “For that I am deeply grateful and ready for the challenge!”

Calloway pivoted from majoring in accounting and playing football under the late Coach Houston Markham to following his passion -- acting. He credits Dr. Tommie “Tonea” Stewart, retired dean of the College of Visual and Performing Arts, for where he is today.

“Dr.  Stewart was the one who introduced and planted the seed in me to become a thespian.  She took me under her wings and taught me everything I needed to know – patience, discipline, knowledge of the craft, integrity and a strong drive to accept only the best of myself. Her Theater Arts Department was a well-oiled machine,” Calloway remarked.

Calloway said he tells everyone he meets that he is “a proud Hornet.”

“ASU brought me through the ranks. My seed spread in that soil back in the ‘90s. I became a man at Alabama State and learned how to make grown-up decisions. I was surrounded by people who truly cared about me, believed in me and my future. I wouldn’t change my experience at ASU for anything. I think an HBCU collegiate experience is a must,” he exclaimed.

When asked whom he admires, he immediately said Dr. Stewart, and soon after several more greats.

“She planted the seed. I will always call her my second mom,” he said.

“Denzel let me in when we worked on ‘Pelham.’ He gave a young brother a chance when he knew I didn’t have one movie credit under my belt.  He brought me into the fold. I will always pay homage to him and the late great director Tony Scott. They could have brought in a big name for my part, but they brought in J. Bernard Calloway,” he said.

Although Calloway calls Harlem home, he still makes time to come back to O’ Mother Dear to participate in theatre symposiums and summer camps.

“When I speak to students, I tell them whatever they decide to do, it has to be something they are very passionate about and if it’s worth having, it’s going to be hard work. They must learn to be a jack-of-all-trades, a renaissance artist by having their hands in every aspect of the industry – theatre, film, TV, commercials and voice-over,” Calloway said. “I tell the students to work hard, put in the time, the discipline, the effort and they will be successful.”