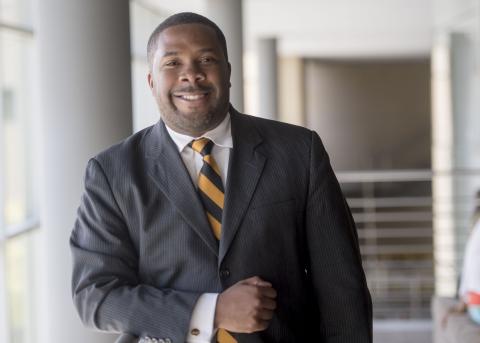 DeMark Liggins, an Alabama State University alumnus, and his friend Mark Spatt have developed a unique initiative in response to the deaths of Congressman John Lewis and the Rev. C.T. Vivian, two Civil Rights giants who died on the same day.

Liggins and Spatt have launched a campaign called “#My54” to honor the life and legacy of these two champions. The initiative encourages people to commit to moving 54 miles over a 30-day period.

“We decided to develop a platform that shared Rev. Vivian and Congressman Lewis’s history, which was the 54 miles they marched from Selma to Montgomery. We want people to share what their 54 is,” said Liggins, who serves as chief of staff for a civil rights group.

Liggins, who met Spatt through the Atlanta Black Jewish Coalition, an organization that John Lewis co-founded, said to date a couple of hundred people have signed on, including civil rights leader Andrew Young.

“When Mr. Young heard about the initiative, he went to our Web and shared his #My54 story,” Liggins said. “We want to give that same opportunity to others. We have been amazed at the response we’ve received so far.”

Liggins said people can support #My54 by walking, running, riding a bike or    doing other activities that are important to them.

“We encourage people to be active, but for those who can’t do physical activities, we ask that they do something that represents 54 miles of intentional activities. My father said, ‘Hey son, I don’t know if I can walk 54 miles, but I will get 54 people to register to vote.’ That was his #My54.  Others have committed to do 54 yoga classes or 54 intentional tweets. People decide for themselves what issue is their 54,” Liggins said.

Though it was born in Atlanta, #My54 has quickly gained a following across the globe, according to Liggins.

“We were excited to get the word out about #My54. This is a labor of love, and we are glad to do it,” Liggins said.

Liggins, who graduated from ASU in 2001 with a finance degree, credits ASU for his focus on community action.

“Alabama State University is the pulse of the Civil Rights Movement and the pulse of positive change. We need to remind people that civic engagement is in our DNA, if you are a Hornet,” said Liggins. “

While at ASU, Liggins was the SGA President, a Golden Ambassador, worked for the University paper and joined Kappa Alpha Phi Fraternity, Inc.  Recently, he was named one of ASU’s 50 Under 50 recipients.

“I want students to know ASU is where you cut your chops,” he said. “I’m a Bama State fanatic.  I love my school,” he exclaimed.