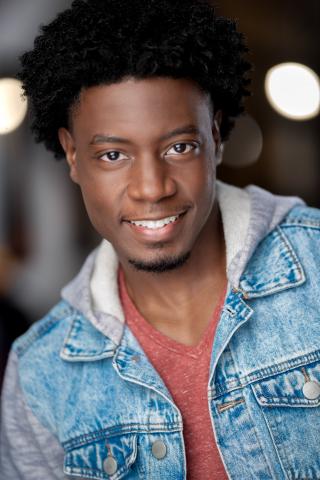 When the lights of Broadway shine again in September, ASU Theatre Department alumnus, Brandon A. McCall will be in the spotlight as the central character of “Simba” in “The Lion King.”

McCall was on tour in “The Lion King” before productions were canceled due to the pandemic. He said his first excitement came when he received the call that after an 18-month hiatus, he would be back on tour later this year. Then he got the news about being selected for the Broadway cast of the long-running musical.

“Time stopped for me in that moment and I went completely silent,” said McCall. “The general manager (of the show) kept asking me if I was still there. I finally said, ‘Don’t play with me. Are you serious?’ He laughed and said, ‘I’m so serious and I’m very excited because I haven’t been able to make this call for so long.”

The general manager's response referred to the fact that when the pandemic hit, Broadway closed.

“Everything shut down, not just for the actors and crew, but everything related to the arts. You can imagine where that put our families. And now to be back and to be on Broadway, I am so excited,” said McCall.

McCall credits his mother, Josephine S. Wilson, with exposing him to the theatre.

“Actually, when I was 12, my mother looked for a way to keep me busy in the summer while also giving me a chance to ‘discover who you are.’ Because she had heard me sing, a friend told her about an audition (for a summer camp).”

McCall said he auditioned for JCCEO YES Ambassadors, an organization that produced plays with topics relevant to young people. Having sung in church and having a natural ability to dance, McCall was secure in those two areas of his audition. He was not as confident about his acting skills.

“They said I had to do a monologue and I wasn’t even sure what that was. But I did an oratorical reading of ‘Freedom Train’ by Langston Hughes and got a callback.”

McCall said he and another aspiring actor had parts specially written for them as mascots, and they became two of the lead actors of the show.

That role helped to light the fire within McCall for acting. He is still very passionate about what he does and is thrilled to be able to get back to what he feels is a calling.

“I really feel that I am helping to change lives when I’m on stage. If I change one life while I’m on that stage—if I make one person smile or one person find joy— my job is done.”

McCall says the Lion King story is a great vehicle for him to have an impact on the lives of others.

“It’s about Simba losing his father, forgetting who he was and then repurposing his life, persevering despite everything that’s going on back home with Scar and Pride Land. He left his mom and everything he knew. People go through these kinds of things for real. It’s real life. There is a message in ‘Lion King’ for everyone. I’m just a storyteller. I like for people to feel what’s happening on stage. And then after the show is over, they come to give their testimonies about how they saw themselves in the story. I hope that it allows them to use the play as a means of putting into words what they have not been able to share with their families and friends. I hope it helps them.”

McCall said theatre was not his first career choice. He had planned to major in biology and become a pediatrician. His direction changed when he was a high school senior.

“I was walking down the hall and my 9th-grade history teacher asked me about my plans after high school. I told her I was going to major in biology. She said ‘that’s good because I thought you were going to try acting and I was going to tell you I didn’t think that would work for you.’ I thanked her, walked off and that day, I changed my major from biology to theatre. No one was going to tell me what I couldn’t do.”

When choosing a college, the former middle and high school drum major said he had one primary requirement.

“I knew I wanted to go to a school with an amazing band. I had three schools in mind—Jackson State (University), Miles College and of course, Alabama State University. ASU had an awesome band and an awesome theatre department; so, for me, it was a win-win situation. Besides, ASU offered me an academic scholarship, so it was a no-brainer.”

McCall is grateful to the ASU Theatre Department for its role in setting the foundation for his successful career as an actor.

“Alabama State had what I needed. I didn’t have to look at an Ivy League school and didn’t even have to leave the state of Alabama. I found what I needed at ASU, including my wife, longtime friends and professors like Dr. Tommy (Tonea) Stewart (former dean of the College of Visual and Performing Arts), Brian Martin and Anthony Stockard. They really poured into me and made sure I was prepared for the competitions for graduate school and professional work. They really molded me and shaped me into what I needed to be. Without the training I received (at ASU), I don’t think I’d be where I am today.”

Martin, who currently serves as the interim chair of ASU’s Department of Theatre, remains in contact with McCall.

“I am extremely proud of Brandon and excited for him to have this opportunity in ‘The Lion King,’” said Martin. “When he was a student, he appeared in several of our most popular shows, including ‘Soldier’s Play,’ ‘Black Nativity,’ ‘Broke-ology’ and ‘Smokey Joe’s Café.’ Brandon is extremely talented. When he’s offstage, he’s very humble and quiet; but as soon as he takes the stage, he is amazing! He’s known for those surprise moments when he hits those notes that bring the audience to their feet.”

Broadway audiences will have the chance to enjoy McCall’s talents when the curtains rise on September 14, 2021, for the newest season of “The Lion King,” McCall will be part of a cast that includes another ASU Hornet, Bonita Hamilton Caesar (’97), who has given life to the role of “Shenzi” for a number of years.

McCall said he is excited to be on the list of ASU theatre alumni who have found success on Broadway and other major stages across the country.

“If you were in theatre at Alabama State during Dr. Stewart’s tenure as dean, you would hear her and Mr. Martin and Mr. Stockyard tell the stories about the people who had graduated and got the big jobs. We heard those names over and over again. Now, I’m happy my name will be heard over and over again by current and future theatre students,” McCall said. “I feel like I’m joining the ranks of Bonita Hamilton, Yohance Myles, J Bernard Calloway, Charlie Hudson, Marcus Henderson and others. I know that if I don’t leave a legacy anywhere else, I know that I’m going to leave one at Alabama State. I’m really proud of that.”

McCall is married to his college sweetheart, Denika, also a 2011 graduate (educator major) and his “biggest supporter.” They have two children: 4 year-old Bréa and the newest member of the family, Briley, who was born on July 30.