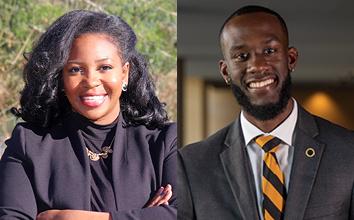 ASU alumnus Darren Dubose may live in Houston, but his heart remains firmly planted in Alabama, specifically the section of the state that is known as the Black Belt.

As the world grapples with the coronavirus (COVID-9) pandemic, Dubose and fellow ASU graduate, Akiesha Anderson, are showing residents in Alabama’s Black Belt that they are not forgotten.

Dubose (‘15), whose hometown is Butler, Ala., began his crusade several weeks ago by posting a petition on his Facebook page. The petition encouraged the state to create testing sites within every Black Belt county in Alabama. That petition to date has garnered almost 500 signatures.

“I felt the need to do something,” Dubose said. “The Black Belt is home; so, I definitely wanted to be a part of change in my community.  I was alarmed that there was a lack of access to tests within the Black Belt, which certainly would lead to not only a delay in COVID-19 detection within these areas, but also a delay and hindrance to both the community and members receiving timely and adequate care.”

Dubose noted that he called on another ASU alum, Sally Hines, to help draft the petition. Dubose then went live on social media to make an impassioned plea for support of his cause.

Anderson (’10), a local attorney with the Alabama Appleseed Center for Law and Justice, saw Dubose’s Facebook post and immediately contacted him to see if they could coordinate their efforts. She said she knew Darren when they worked in Congresswoman Terri Sewell’s office about five years ago.

“I have family in the Black Belt, my grandmother and stepmother are from that area, so I wanted to get involved,” Anderson said.  “I made a Facebook post a few weeks ago asking people if they has heard of any advocacy efforts taking place in the Black Belt to create testing sites. Darren’s name came up under my Facebook post, and we touched bases about what he was doing and how we could brainstorm ways to go forward.”

The letter was signed by Dubose and Anderson along with a coalition of other nonprofits and leaders throughout the Black Belt.

At the time of Anderson and Dubose’s efforts, there were no COVID-19 sites set up in 10 of the 18 Black Belt counties (Pickens, Greene, Sumter, Choctaw, Lowndes, Butler, Crenshaw, Bullock, Russell and Barbour counties). Since then, the Black Belt Community Foundation and the Rural Health Medical Program report that there are testing sites in Dallas, Wilcox and Hale counties; other community members have reported that there is also testing available in Perry County.

As of this writing, three county health departments in rural Alabama have opened one-day testing sites in Lowndes, Bullock and Tallapoosa counties.

Dubose and Anderson like to think their efforts had something to do with the opening of these rural testing sites.

“I like to think so. I was pleasantly surprised to see how quickly more sites came. The Emergency Management Agency did respond to my letter. They told me there were plans in place and put me in touch with people at the Department of Public Health,” Anderson said.

“I think we brought awareness to the issue. I want to see these counties continue to have testing sites as we go through these difficult times,” he said.

Alabama’s Black Belt – named for the dark, fertile soil – is home to some of the poorest counties in the United States.

Because of the communities’ high rate of poverty, Dubose and Anderson noted the Black Belt may be more vulnerable to the worst of the COVID-19 outbreak because of a combination of social economics and health care disparities.

“A large number of Black Belt counties are served by only one hospital, while others, like Perry County, have no hospital,” Dubose said. “These rural communities also lack transportation to get medical help. Historically the Black Belt has been left behind because of economic resources, so it’s imperative these counties receive testing.”

“This means asymptomatic COVID-19 carries may be slipping through the cracks,” Anderson said. “Without testing, we knew there were going to be very clear problems that would arise. There would be misconceptions that the virus had not hit the Black Belt, which would lead to just more ‘business as usual’ with people assuming they are safe.”

Anderson noted that testing programs that truly address the needs of our rural residents are the only way to prevent the undetected, catastrophic spread of COVID-19 in communities that do not have the medical resources needed to save the lives of those who will become the most ill.

Anderson and Dubose said statistics are coming to light only now and only in piecemeal fashion showing that African Americans are disproportionately affected by COVID-19.

“I would not be in a position to be able to do a petition if it wasn’t for ASU,” Dubose said.  “I’m grateful for the foot soldiers who came before me, through Montgomery and Selma, for me to be able to continue to make a change and to give back to a place that gave so much to me.”

Dubose, a former ASU Student Government Association (SGA) President and former Golden Ambassador, shows his love for his alma mater every day in his classroom in Houston.

“I had the unique opportunity to get my students really invested and involved in Alabama State. My sixth grade classroom is named after Alabama State and I taught them about four ASU chants,” Dubose said, explaining that his school had teachers name their class after their alma mater. “I think that particular class will always remember their homeroom class and Alabama State University.”

As for Anderson, she said she credits ASU for her ability to spot and discuss social problems.

“The skill set that I learned as a sociology major at ASU is what ultimately led me to law school, which helped me develop the skills to advocate. Everything I learned in terms of identifying social problems started at ASU,” she said.

Dubose stressed how vital it is to show humanity during this challenging time.

“The coronavirus is contagious but so is compassion, and people are stepping up every day to prove it,” Dubose said.

Anderson remarked that supporting those in need is important.

“In this time of hysteria and nerves, neighbors are coming together to help the vulnerable,” she said. ” People comforting others is a bright spot coming out of a dark time.”