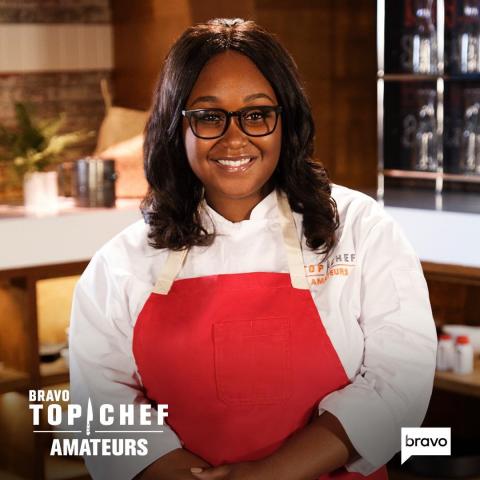 Hardin, a biology teacher at Wetumpka High School in Alabama, demonstrated her cooking skills on the August 19 episode of the Bravo reality series. She flew to Portland, Oregon, to film the episode which took two weeks to complete.  Bravo held the episode for almost a year before releasing it.

“I was at the Alabama National Fair with members of my family when I found out I was selected for the show … I immediately burst into tears. I was filled with joy to the maximum capacity,” Hardin said.

Hardin noted that unlike “Top Chef” where more than a dozen chefs compete throughout the season and are eliminated after multiple cooking competitions, “Top Chef Amateurs” focuses on two amateur pro teams per episode. Each home cook appears on a single episode and has one shot to win the weekly $5,000 prize.

“A sweet twist to the show is that we were competing in challenges where recipes actually came from Top Chefs,” she added.

Hardin teamed up with Eric Adiepong, a professional chef and a “Top Chef” alum, in an episode titled “Lasagn-YEAH!” Their challenge was to create a dish that offered a twist on traditional lasagna in 45 minutes.

Her competitor was Antwan Jones, an insurance adjuster and home cook from Los Angeles, who paired with another "Top Chef” alum, Stephanie Cmar. Both contestants created lasagna roll-ups on the episode. Hardin’s dish had a spicy meat sauce that consisted of pork and beef and Jones’ dish had a Korean influence and three types of cheeses.

“Adjepong offered help and support, while I took the lead,” Hardin said. “The mentors couldn’t give us directions on what to do or how to do things. If you needed something chopped or cut, they would do that. They were sort of like sous-chefs.  I originally started out to make lasagna cupcakes but time got in the way, and we decided on the lasagna roll-ups.”

“Waiting to find out who won was a little nerve-racking. When they told me I was the winner, my mouth hit the floor. I immediately started crying. I knew I wanted to put my best on the plate and I knew I wanted to make sure the flavors were right so the judges wouldn’t care about any other components of the dish,” she explained.  “I guess I was successful because they selected my dish. Always stay true to your flavors.”

The entire series is filmed in advance. A total of 24 home cooks will appear on the show’s first season.

“I’m the only contestant from Alabama,” Hardin said. “I’m a black Southern female who has a twang, representing others who look like me and who want to get into the industry. Representation means a lot to me, especially when my students see me and they feel influenced by what I’m doing in the classroom and the kitchen.”

The busy teacher, wife, mother and home cook takes time out from her hectic schedule to share her assortment of Southern comfort foods with 80,000+ social media followers on her food blog channel on YouTube, TikTok and Instagram.

“I started my blogging in 2020 because of (COVID-19) quarantine. I was sitting at home, bored and didn’t have anything to do and the idea popped in my head to go ahead and start my food blog channel. Social media is the way, truth and the light. I was on Instagram one day and a “Top Chef” producer reached out to me about appearing on the show.”

There is no slowing down Hardin. She also is writing a cookbook that should be on bookshelves soon