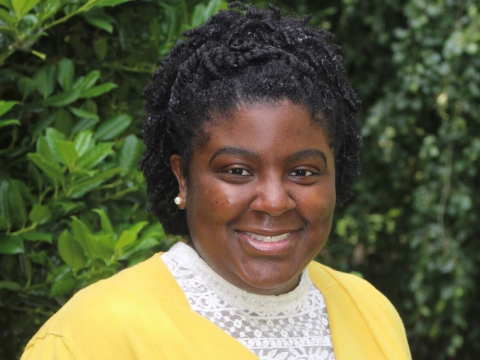 Maddox graduated from ASU with a degree in communications. Since leaving the University, she has been employed at Georgetown University in Washington, D.C. for more than a decade, holding various positions, including working with faculty, staff and students on issues involving diversity and racism. She has been Georgetown's assistant director for the office of Leadership Development and Racial Justice Initiatives since 2017 as part of Georgetown's Center for Social Justice Research, Teaching and Service. She also obtained two master's degrees from Georgetown in journalism and in communication, culture and technology.

ASU PUT HER ON THE ROAD TO SUCCESS

The Walker County, Alabama, native said that Alabama State University put her on the road to success and in a closer relationship with her community and identity.

"Alabama State was the place that I finally understood how to be myself, and the University allowed me to blossom through what I was taught by my professors and in studying at an HBCU. At ASU, I learned what it meant to be black, which ultimately allowed me to find joy in my blackness," Maddox said. "Not only was ASU a great place to receive an excellent traditional education, but in being with so many other people who looked like me, ASU allowed me the freedom to finally be comfortable in the skin that I am in."

Her new employer said Maddox was selected from a field of nearly 500 candidates who applied for the NPR position.

"Whitney Maddox is a dynamic, creative, diversity leader. Whitney will join me in working on diversity, equality and justice efforts across NPR and with our member stations. She'll be part of the NPR training team and will help magnify the work we do in partnership with Human Resources and Strategic Planning," Woods said in a statement.

Woods added that the ASU alumna made her mark at Georgetown by designing and promoting its "STAR" program (Start Talking About Race), which brought up issues concerning race at Georgetown University and offered ways for its college family to address the issue. Because of Maddox's efforts with the STAR program, she has facilitated anti-racist conversations with hundreds of students and faculty, and the Georgetown Police Department.

NEW JOB AT NPR IS ABOUT LOVE AND TOLERANCE

Maddox said that her new job at NPR will allow her to do such projects as conducting diversity training and leading anti-racism training and seminars. She will also serve as an internal consultant to assist individual NPR employees and teams in recognizing and achieving diversity goals.

The NPR announcement of her employment describes her as "someone who listens deeply, leads with empathy, and pushes for social justice with uncompromising urgency."

"It wasn't until I moved to Washington, D.C. that I truly understood the historical and societal importance of The Alabama State University, what has occurred at it since it helped give birth to the nation's civil rights movement and how it has always promoted and defended justice and freedom. I also realized how ASU's graduates have impacted the nation and helped people seek and obtain the truth, like me."