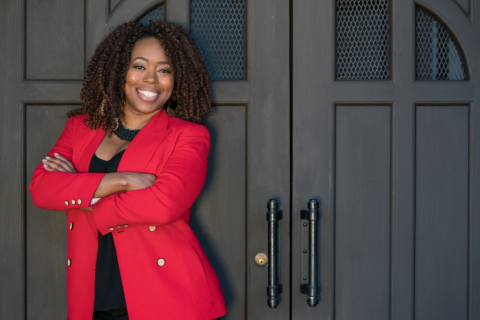 Alabama State University alumna Kamilah Long (2002) has been named managing director of Play On Shakespeare in Ashland, Oregon. The not-for-profit organization is dedicated to exploring the world of Shakespeare through translation and adaptation.

“I am ecstatic to be named incoming managing director of Play On Shakespeare and begin this extraordinary partnership with Lue Douthit, Taylor Bailey, Summer Martin, the POS Board, its artists, and the entire theatre community,” she said. “More importantly, I believe in the mission of Play On and how it wants to engage with the world, what it aims to achieve and its ability to shift the world by shaking things up in such a magnificent and necessary way. This position is a dream come true for me, I am a fan of the work and a fan of the entire POS team and I can't wait to start this new journey with them."

Play On Shakespeare’s mission is to enhance the understanding of Shakespeare’s plays in performance for theatre professionals, students, teachers, and audiences by engaging with contemporary translations and adaptations. In the fall of 2015, the Oregon Shakespeare Festival announced a new commissioning program called Play on! 36 playwrights translate Shakespeare. The project was simple yet enthusiastically ambitious in its original conception: to commission 36 playwrights to translate 39 plays attributed to Shakespeare into contemporary, modern English over the course of three years, with a commitment that the commissioned group comprised at least 51 percent women and writers of color. In its three-year tenure at OSF, Play On! worked with nearly 1,000 actors, directors, stage managers and producers on nearly 80 readings, workshops, productions and demonstrations in 19 different cities, collaborating with 24 different theatres and academic institutions around the world.

At the end of Play on!’s three-year tenure at OSF, energized by its overwhelming scope and success, the project’s producing team secured funding to form their own, new not-for-profit company. On January 1, 2019, they established Play On Shakespeare. Their first endeavor as a new organization saw them producing the Play On Festival – a series of staged readings of all 39 commissioned translations in an action-packed 33 days. The festival engaged hundreds of artists and was produced in partnership with Classic Stage Company and Oregon Shakespeare Festival. Plans for this fall and early 2021 will be unveiled shortly.

During her tenure at OSF, Long has managed, organized, launched and completed OSF's $5.1MM Access for All campaign. As the Senior Director of Individual Giving at OSF along with the director of development she led strategy and execution for fundraising for the development team and spearheaded the launch of OSF's first ever crowdfunding campaign with a goal of $5MM.

Long is well known for her work in the community as thought leader in the area of Equity, Diversity and Inclusion (ED&I). She also is a facilitator and served as chair of the Resource for People of Color (RPOC) for four years, and produced their annual retreat. Long's experience as a professional actor, producer, speaker, educator and director gives her a unique combination of skills which is often relied on in the theatre world.

As the managing director of Play On Shakespeare, Long will provide shared leadership with CEO and Creative Director, Lue Douthit.

"We are thrilled that Kamilah Long, who we worked with during our OSF days and is a longtime supporter of Play On, has agreed to join us as managing director,” Douthit said. “She sees the world through an expansive creative lens, and has a depth of experience as a producer on the artistic side and senior director on the development one. This newly-created position oversees all operations and I can't wait to begin working with her.

“Having traveled with Kamilah to attend productions of Play On translations in theaters around the country, I’ve felt her enthusiasm for the project and her desire to help make Shakespeare more accessible,” he said. “Kamilah’s extensive experience will help Play On build on our successes and move towards fulfilling our even more ambitious plans for the future.”

For more information about Play On Shakespeare visit www. https://playonfestival.org/.