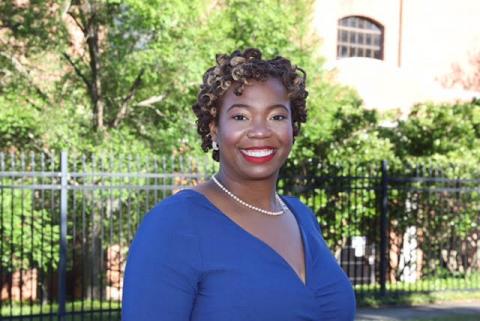 An Alabama State University alumna with deep family roots in the Hornet Nation has been named as the first-ever CEO of "The Mill District," which is a community development organization that covers four historic Columbus, Georgia neighborhoods known locally as City Village, North Highland, Anderson Village and Bibb Village.

ASU Hornet Nation family member Lauren Davidson Chambers (Class of 2008) began work as the CEO of TMD on June 28 and says that her time as an undergraduate student at ASU enabled her to take on this important job and other tasks throughout her adult-life; however, she admitted that she had already committed to attend another school after her high school graduation - and even had her room assignment - until her great aunt, ASU alumna Gloria Battle (Class of 1957), interceded and convinced her to scrap her plans and instead attend Alabama State University.

Chambers said that attending ASU has been among the wisest decisions that she has made so far in her life.

"If you know my great aunt, Gloria Battle, you understand her deep and abiding love of everything ASU. So when she sat me down and discussed the virtues of me changing my college plans and attending the University, there was nothing to do but submit my application to attend ASU. Everything she said made sense about how wonderful and helpful Alabama State would be to me in school and after graduation. It is among the many things that I thank my Aunt Gloria for sharing with me," said Chambers by phone from her new office.

FIRST-EVER CEO OF THE MILL DISTRICT

Now that the fledgling TMD organization has established itself, its board of directors decided to hire a full-time CEO, choosing Chambers to lead the erstwhile work that it began when the organization was founded in 2014. TMD was created to take on the leadership role within the Columbus community to help lift-up and revitalize the four distinct communities that the organization serves with a goal to transform the areas into more vibrant and economically thriving communities.

Chambers said that the creation of TMD is both supported and staffed by Historic Columbus, a local non-profit.

Justin Krieg, director of Planning and Programs for Historic Columbus, has played an integral role in the leadership of TMD from its creation until now. He stated that even amidst the COVID-19 outbreak, the new CEO position attracted several dozen applicants. Chambers stood out among the group.

Chambers, who earned her Bachelor of Science degree in psychology from ASU, is a member of Delta Sigma Theta Sorority, Inc. and has a reputation as a go-getter and a leader within her community. She was formerly the marketing account manager for Amerigroup, the volunteer coordinator for the Columbus Alliance for Battered Women and the coordinator with the Columbus Family Center.
Chambers grew up in Phenix City (Russell County), Alabama and graduated from Pacelli High School. She resides in Columbus.

ASU HELPED HER ADVANCE IN MANY WAYS

Chambers stated that her experiences at Alabama State University has helped to prepare her in many ways for professional success.

"ASU prepared me for the world. It taught me to be proactive, to ask questions, read a wide array of books, set goals and accomplish them. The University allowed me to meet wonderful people and helped me to not be afraid, to interact, make personal and professional connections," Chambers shared.

"I love ASU and attending and graduating from it are among the best decisions that I have ever made."