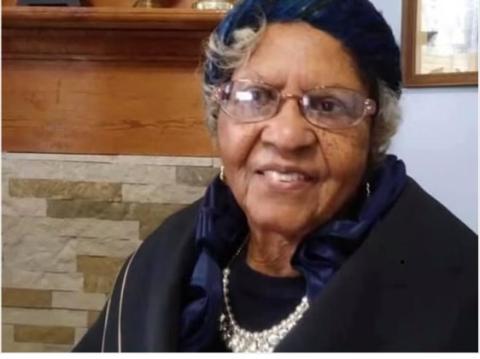 Ethel ​​Abrahams has reached a milestone that only a few other people have achieved. On Saturday, May 28, 2022, she celebrated her 106​th​ birthday.

A 1939 alumnus of Alabama State University, Abrahams earned her degree and went back to her hometown of Uniontown, Ala., where she was a 5th-grade teacher for many years until her retirement. Abrahams said she tried to teach her students more than “their lessons.”

“I was trying to raise the children up…to do the things that are right as I did.” She said she taught them​​ “Don’t drink, don’t smoke and eat right…and always tell the truth.”

Abrahams said her professors at Alabama State Teachers College (now Alabama State University) prepared her to be successful in the classroom.

“If you needed help, they would give it to you, and tell you to go on and get your education so that you could help others,” Abrahams said.

Abrahams said when she came to Montgomery to attend college, her eyes were opened to a lot of new experiences. “I didn’t even see an airplane until I came to school,” Abrahams explained with her trademark smile.

Abrahams said she’s thankful for all that she learned while in college.

Abrahams’s college experiences were very different from her life in rural West Alabama. Her daughter, Berna Howell, recounts one story that her mother loved to tell about being a young college student.

“She said her dad would send her the fees for them to go to the dances. He was a preacher and she said because her dad told her dancing was a sin, she would stand on the wall and wouldn’t dance. But she would go because they had paid for her fees to go. So, she said they began to call her Wallflower. So​ now we tease her and say, ‘The Wallflower​ i​s still blooming.’”

THE SECRET TO HER LONGEVITY

When asked for her secret to living a long life, Abrahams quickly answers, “Doing things that are right, reading my Bible every day, going to church and praising the Man Upstairs!”

Abrahams’s faith is an important part of her life. When she turned 100, she moved to Fairburn, Ga., to live with her daughter. She has become a faithful member of New Horizons in Faith Church, where her son-in-law, Dr. LaReece Howell, is pastor. Her daughter said her mother attends every service.

“She goes to church every Wednesday and every Sunday and goes to Sunday School,” Berna Howell said.

Abrahams’s church was the site of her 106​th​ birthday celebration. Friends and family gathered to honor her and shower her with love and gifts to mark the day. Her tributes included proclamations from the Mayor of Fairburn and from Fire Chief Cornelius Robinson, who is an ASU alumnus.

Several “Hornets” also showed up for the occasion, representing the Metro Atlanta Chapter of the National Alumni Association.

“When I saw her story on television, I knew we had to be there,” said Lamuriel Adams, the alumni chapter’s Black and Gold Committee chairperson. “Attending from our chapter were Vicky Thomas, Vickie Tellis, Celia Griffith and myself. We presented her with balloons, a card, a gift card, ASU/MAAC ​T-s​​hirts and a letter from ASU President, Dr. Quinton T. Ross, Jr. It really was a wonderful celebration.”

A CELEBRATION OF A FULL LIFE

Howell said her mother and her father, Walter, were married for 58 years. She describes Abrahams as “a real family person. She has 3 grandchildren and 13 great-grandchildren. She prays for them every day.”

Abrahams has lived a very active life. Her daughter recalls that when she was a child, her mother’s activities outside of the classroom centered on those things she learned as a child growing up on a farm.

“She was a member of the garden club, and she loved to garden. She grew watermelons and greens and okra…you name it. She had chickens and cows and churned her own butter. She made soap out of lye. She made quilts, and she took stockings and made rugs with them,” Howell said.

Abrahams said she always believed in having “busy” hands.

“I always wanted them to be busy. If they’re busy, they won’t do things they shouldn’t.”

“I take my walk every day. That’s important.”

Howell said despite her age, her mother has no health issues and takes no medication. She still has a sharp mind and a sharp wit. In a recent interview with Atlanta’s WSB television station, she recited the alphabet — backward — after asking the reporter, “You want me to go fast or slow?”

And she is quick to remind you of her simple, but apparently effective, life’s philosophy.