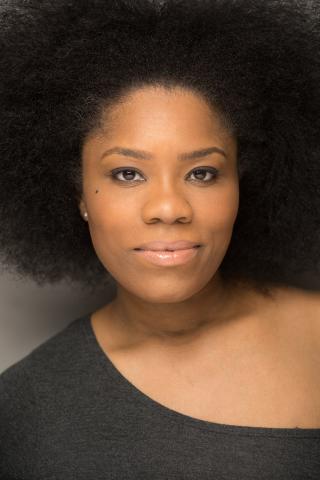 A cameo in MGM’s new film “Respect,” a biopic of Aretha Franklin, has provided Alabama State University alumna Amber A. Harris the opportunity to flex her musical abilities.

“Respect,” named after Franklin’s 1967 hit, stars Jennifer Hudson as the legendary soul singer. The film traces Franklin’s journey from a talented kid singing in her father’s church to being one of the most iconic artists of all time.  Franklin died in 2018.

“I’m the only female musician in the band when the adult Aretha Franklin is revealed in the film. There are no lines, but you will see me a few times in the film playing the piano as she sings,” Harris said. “When Jennifer Hudson appears, that’s the first time I will appear.”

Harris (teacher, actress, singer, director, writer, producer and philanthropist) said the film is scheduled to be released in the United States next year.

Born and raised in Atlanta, Harris has had a love for the arts since childhood.

“I was the only child, so I would entertain myself and others,” she said.

Harris begin performing professionally at 16 at the Tony Award-winning Alliance Theatre. She played Pinkie Davis in the play “Here it Is – God is Trying to Tell You Something.”

“I credit my mom, the late Carolyn Harris, for where I am today. She made a lot of sacrifices for my artistic endeavors and allowed me to express myself freely. She took me to my first professional audition when I was 16 and I've never looked back," Harris pointed out.

Harris has performed in more than 33 theatrical productions in 37 states in the United States, and in China and Europe. She also has starred in several off-Broadway shows, including “DOT,” directed by Kenny Leon.

“I love stage and live theatre for the interactions and instant gratification the audience gives. I love film and TV because that’s where the money is,” she said.

Harris, an ASU 50 Under 50 recipient, has worked on more than 25 films/tv shows and music videos. In addition to making movies, she recently casted five Screen Actors Guild (SAG-AFTRA) short films.

“I also was part of the casting team for the TV show “P-Valley” on Starz. I cast a few people for the show,” she said.

Harris has toured as a featured soloist and performed with legends such as Hinton Battle, Kirk Franklin, Fred Hammond, Brian McKnight and Wynton Marsalis.

Through her entertainment company, Just An Inch LLC, Harris has written, produced and directed her own films, including “Boarding House,” highlighting homelessness and the severity of this international issue. The film had its world premiere in Nova Scotia and was nominated for Best Student Film in Nigeria. Her SAG short film “Never Alone,” starring several ASU alums, deals with mental health in the black family.  It had its world premiere at Universal Studios in Los Angeles.

“I’m most proud of taking the first step to start my company. It’s made me money and it’s put me in the hole, but that’s all a part of the business. It’s not always about the money you make or winning, but a learned lesson in the end,” Harris explained.

Harris said the main reason she started her production company was to help other minorities, especially ASU graduates.

“I wanted to be successful and to network and make connections in order to create jobs in the industry for people who look like me, and for people who attended ASU with me, those who haven’t had the opportunity to be heard or seen or had that big break,” she said. “All of my films I’ve written, directed and produced always star ASU graduates. They will always be included in my productions, either behind-the-scenes or in front of the camera.”

The other reason she started her production company -- “I simply love what I do."

Harris said in the professional arena, there are several artists she admires for shattering the glass ceiling for black artists, including film director Ava DuVernay, who directed “Selma,” "13th," "When They See Us" and the TV show “Queen Sugar” on OWN.

“DuVernay’s sister use to work in the ASU library,” she said.

“My number one inspiration is the one and only, Whitney E. Houston. Her poise, her class, her voice, her beauty, radiated whenever she touched a stage. I wanted to allow people to have that same experience when I touch a stage. I learned from the best; Whitney is the best. I leave everything out on the stage." Harris stated.

Harris auditioned for and graduated from North Atlanta High Performing Arts as a Show Choir student, then went on to study and earn her B.A. in Theatre Arts with a minor in Criminal Justice from Alabama State University. She was a professor of acting at Louisiana State University for two years. She also earned her M.F.A. in Filmmaking from the New York Film Academy in Los Angeles. Upon graduating from ASU, she taught in the Montgomery Public School System.

Harris is committed to giving back to the community, the reason she established a nonprofit organization named “Educated Daughters of Tomorrow” (E.D.O.T.) in 2009.

“The organization focuses on education, arts, etiquette, mentorship and community service for girls in 9-11th grade,” she said.

For up-and-coming actors, Harris advises them not to get discouraged and give up if they have a passion for acting.

“It’s not going to be easy; there will be challenges and obstacles; however, no means next. The race is given to the one that endures to the end. So, you will have to go through the race, through the fire, through the rejections, before you get to the finish line to become that refined accomplished artist,” she said. “It’s a journey but one that’s worth it.”