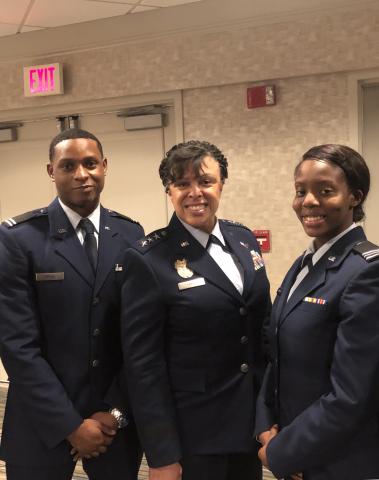 Cadets Taylor Hudson and Nicholas Spruill from Alabama State University’s Air Force ROTC Detachment 019, recently attended the Black Engineer of the Year Awards (BEYA) Global Competitiveness Conference in Washington D.C.  During the conference they had the unique opportunity to meet and network with cadets from other detachments and commissioned officers across the Air Force.

The BEYA Conference, held February 7-9, brought professionals and students together for three days to share their experiences and career information. The attendees were able to receive information, motivation and mentorship from professionals. Air Force Recruiting Service Detachment 1 sponsored Air Force ROTC cadets from Historically Black Colleges and Universities (HBCUs) to attend the conference. Each school was able to nominate up to two students.

"I'm grateful to have had the opportunity to send two of our cadets to BEYA,” said Lt Col. Ann Graham.  “Cadets Hudson and Spruill represented Detachment 019 and Alabama State University well.  The cadets were able to gain valuable experience and knowledge that will aid them throughout their Air Force careers."

Students, like Hudson and Spruill, networked with attendees from around the country while participating in seminars and workshops that explored every facet of STEM career paths. The goal of the BEYA Conference is to create connections between students, educators and STEM professionals while facilitating partnerships with individuals and their local STEM resources.

Hudson said the opportunity to attend BEYA made her notice that everything is possible if you surround yourself with individuals wanting to aid you in your growth.

"For the first time in my life I experienced a weekend full of black excellence,” she said. “I truly believe all minorities should attend events similar to Black Engineers of the Year Awards (BEYA) because it will be a game changer in the minority community.”

Spruill said the event really opened his mind and eyes to all the great engineer and technical opportunities in the world.

“I want to thank God for the opportunity to represent Det 019 at the 33rd Black Engineer of the Year Award Conference,” he said. “While there, I received mentoring from multiple CEO’s and officers in the United States Air Force."