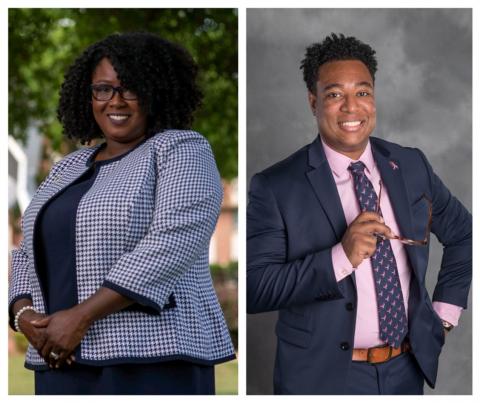 Two ASU administrators have been selected by their alma mater as two of the university’s inaugural "40 under 40 Champions."

Jennifer Anderson, Alabama State University's director of Development/executive director of the ASU Foundation, and Dr. Linwood B. Whitten, ASU’s interim assistant vice president of Student Affairs, were selected by the Alabama A&M University (AAMU) Alumni Association for their proven status as leaders in the community, corporate settings and academic arenas.

"To be acknowledged by the University that raised me from pre-K to my master's degree is a great honor. I am thankful to the alumni association for selecting me to be a member of the inaugural class," Anderson said. "My work at ASU definitely was the crown jewel in my application for the 40 under 40 program."

Whitten noted that he would not be where he is today without the support of both institutions.

"I'm very proud of this moment. Being acknowledged by your alma mater and working at a university that you love, it feels as if you have two families. It's such an honor to be a part of both institutions' legacies," said Whitten, who also holds the titles of director of Diversity and International Affairs, Title IX Coordinator and NSE Coordinator at ASU. "I like the fact that I've been able to have the support of ASU and my alma mater to be a change agent."

For Whitten, the award represents every first-generation college student and student leader who utilized the skills and opportunities that an HBCU experience afforded them to back to their institutions with "immense pride."

Anderson, who graduated from AAMU in 2003, and Whitten in 2004, acknowledge that their work at ASU helped to prepare them for being named a 40 under 40 recipient.

"I'm proud to support HBCUs. As a graduate of AAMU and a doctoral candidate at ASU, I can truly say that an HBCU education instills a strong knowledge base and a sense of determination and purpose," noted Anderson.

"Alabama State University has played an integral role in my career over the last couple of years -- allowing me the platform to serve the institution, students, faculty and staff each day with passion, knowing that I am living my purpose. I consider myself to be an honorary Hornet and I carry that privilege proudly wherever I travel in the world," he said.

Whitten and Anderson pointed out that HBCUs not only provide a great education, but they also offer an atmosphere where a student's humanity is never challenged.

"HBCUs have survived segregation, integration and sanctioned legal disparities, all while maintaining a commitment to the education of black people," Whitten said. "That's why I think this should be reason enough for African Americans to respect HBCUs as they respect other institutions of higher education."