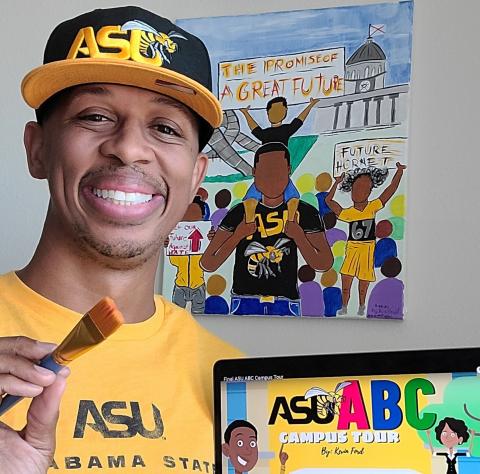 The rich legacy of Alabama State University, one of the nation’s noted Historically Black Colleges  and Universities (HBCUs), is being told in the first-ever animation short about the University, the  “ASU ABC: Campus Tour.”

The short is the creation of award-winning animator/graphic artist/ASU alumnus (’06) Kevin Ford, who wrote, directed and produced the entertaining and educational short animation.  This is Ford’s second in a series of short animations highlighting HBCUs; his first is titled the “ABCs of HBCUs,” which  highlights HBCUs that are not always in the limelight.

“My short animation is to inform, educate and enlighten people who don’t know about ASU. I wanted to showcase and celebrate its traditions and culture,” Ford said. “When I was creating the animation, I learned more about the University. I always thought Shuttleworth was just the campus cafeteria; I didn’t realize it had a civil rights icon behind that name.”

Ford hopes his animation will inspire a new generation of black excellence by displaying positive and realistic aspects of HBCU life.

“ASU ABC” carries viewers on a historical journey from the University’s inception to its involvement in the Civil Rights Movement to present times. It also describes monuments that are located on the ASU campus.

“ASU has allowed students to dream and find success since the 1800s. It has produced poets, visual artists, noted actors, producers, scientists and entrepreneurs. It continues to nurture and inspire a new generation of explorers and creators,” he added.

Ford said the timing and location --  Montgomery, the birthplace of the Bus Boycott – to pay tribute to ASU seems right.

“You’ll feel history all around you at ASU,” he exclaimed.  “I wanted to share that with others. I love my alma mater.”

Since the pandemic, Ford said he enjoys a unique kind of freedom over his work.

“I’ve had time to work on multiple projects. I can create what I want to create and put out what I like. I’m currently working on making an animation about the Books of the Bible. I hope to wrap that up soon,” said the freelancer, who is open to working with clients at various levels.

A San Francisco native who now lives in California, Ford said he became an animator because it allowed him to work in a creative field. “I tell anyone who wants to enter this career (not to ) focus on one thing. Just don’t say I want to be an animator and that’s it… learn all the basics and learn graphic design, too. Never limit yourself to one thing.”

“I’m elated to use my skills as an animator to become a voice for The Alabama State University,” Ford said.