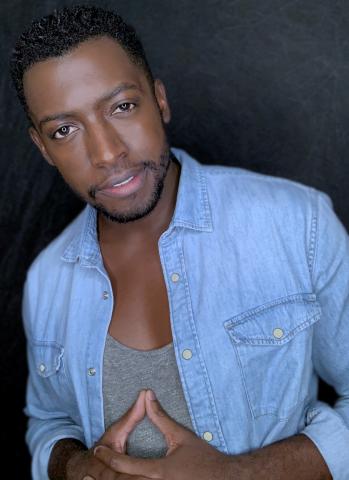 Netflix is releasing several animations in December and one to keep on your radar is “Cops and Robbers” by Alabama State University alumnus (’02) and Broadway actor, Timothy Ware-Hill.  The short film premieres Dec. 28 on Netflix.

The moving animated short, directed by Arnon Manor and Timothy Ware-Hill, was written and performed by Ware-Hill in response to the murder of Ahmaud Arbery earlier this year in Georgia, a video of which first surfaced in May.  Manor was inspired to create an animated version of Ware-Hill’s poem, which resulted in their collaboration.

“After the video release of Ahmaud Arbery’s killing, I was so angry and frustrated that I felt the need to say or do something. So, I took my poem and my phone, and I went jogging in my neighborhood while reciting the poem. I released that poetry video onto several social media platforms, Facebook and Instagram, and it had a viral moment. Manor saw it and reached out to me with the idea of taking my poetry video and creating an animated version. That’s how all this happened, out of the tragic death of Arbery,” Ware-Hill stated.

Ware-Hill, an alumnus of Broadway’s “Kinky Boots,” said Jada Pickett Smith became involved through his friend and mentor on the film, Lawrence Bender.

“I shared an earlier draft of our film with Lawrence, and he was moved by it and wanted to immediately be involved as a producer. And through Lawrence, he started to share our work in progress with other people in the industry. It made its way to Jada Pickett, and when she saw the short, she was moved by it as well and hopped on board instantly as our executive producer. She has been a great ambassador and voice to help push this film and it message out,” he explained.

Ware-Hill and Manor said they made this film “for all the black men, women and children who have been victims of racial profiling, police violence, loss of life and other injustices just for being themselves.”

"Our parents grew up having to fight this, and as a kid, I never imagined that we would still be here when we became adults," says Ware-Hill. "But here we are over and over and over again."

“Cops and Robbers” makes use of a diverse range of animated techniques from more than 30 individual artists, students and VFX companies from around the world, each creating a short segment of the poem with their own visual interpretation of the subject matter.

“Animation and activism unite in this multimedia film,” he said. “Over half of the animators and post-production team on ‘Cops and Robbers’ are black artists,” Ware-Hill said.  “Having black American animators tell the story from a personal experience of being profiled, from being pulled over in their cars and not knowing what the outcome will be, gives a more visual and authentic film. There is a difference between creating art from observation versus art from a personal experience.”

“I recruited a professor who runs the visual arts department at Alabama State University and one other person from the department. They didn’t get to animate anything in the short, but we did have them sketch a few drawings of black activists from the past who were writers. We tried to figure out a way to use it in our film, but we couldn’t.  In the credits, we do give thanks to Alabama State and the two artists that we commissioned to do these drawings.”

In the making of “Cops and Robbers,” Ware-Hill noted that it was done for free.

“All of the artists and post-production team donated their time and talents because they believed in the piece. Not a single dollar has changed hands. Any of the monies that we receive from Netflix, 100 percent of those proceeds will be donated to a black charitable organization,” he stressed.

Ware-Hill, writer/filmmaker/actor/activist, said he hopes viewers take away from “Cops and Robbers” a continued awareness to what we, as black Americans, have been going through since the founding of this nation until present day.

“I hope it encourages people to become engaged and active and move to make real change,” Ware-Hill pointed out.  “I want the short to continue to start a conversation and challenge our allies to not only to talk about it but actually get up and act to show black lives truly matter.”

Ware-Hill said his ideas are sparked from a personal place. “If something personally affects me or if I see someone else going through something, the words come…I’m grateful that I have the gift that I have to be able to see the world through the lens that I see it in and to use art to share my perspectives.”

The Montgomery native, who now lives in Orange, New Jersey, comes from a family of writers – his aunt and late grandmother were poets.

“Both of my parents influenced and supported me as a child to explore my creative side. I give a lot of gratitude and thanks to them because never did they say no you can’t be an artist or no you can’t learn acting or singing or dance. They opened up the world for me. My parents allowed me to live creatively without walls,” Ware-Hill said.

While growing up, Ware-Hill said he immersed himself in fantasy films.

“I love writing fantasy. I grew up watching a lot of fantasy films, but I didn’t see people who looked like me in those movies. So, the things that I write, the fantasy world that I create, they are full of us,” he emphasized.

Ware-Hill said anything in life worth having comes with obstacles and challenges.

“I tell up-and-coming artists if they truly love it, stick with it no matter what,” he said.

Ware-Hill said his has several projects in the works.

"Right now, I really enjoy my relationship with Netflix and would love to do more with them,” Ware-Hill said.  “But I’m also working on feature-length film, such as ‘Tyrone and the Looking Glass,’ which is getting some interest.”

By this time next year, he said he hopes to be on set wrapping up shooting “Tyrone” or some other film that he is working on right now.

“I will continue to tell the stories that reflect my ideas and about black people and our journey,” he said.

Ware-Hill was accepted into the University of California, Los Angeles’ M.F.A. Acting Program and recently received an M.F.A. in Screenwriting from National University.

His Broadway career includes the Tony Award-Winning Broadway musical “Kinky Boots,” where he performed the lead role of Lola in the U.S. and national tour, and the one-act drama the “Dutchman.” He’s  been  across the country touring with “Mamma Mia!” and “Jesus Christ Superstar.” His TV credits include “For All Mankind” and “Them: Covenant.”

Ware-Hill said he owes a lot to ASU, where he received his B.A. in Theatre Arts.

“ASU is where I grew up; it gave me my foundation. To be on campus with people who looked like me from different walks of life, that experience is like no other. It helped to ground me and find my own voice as a black man.  ASU gave me the tools to navigate this world and I give a lot of that credit to Alabama State and Dr. Tommie Tonea Stewart, who was the dean of the College of Visual and Performing Arts. Some of my fondest memories are on that campus,” he said. “In fact, some of my friends I made on campus are still my friends today.”

Ware-Hill said there is another connection to ASU. “My mom graduated from Alabama State.”