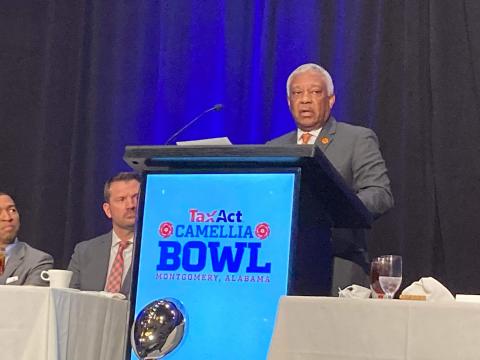 Former Alabama State University quarterback, Woody McCorvey, has been named the ​​2021 TaxAct ​​​​Camellia Bowl Alabama Football Legend presented by Regions Bank. McCorvey, who was the Hornets’ quarterback from 1968-71, earned his bachelor’s degree from ASU in 1972. The award was presented during a luncheon in Montgomery on Thursday, December 23, 2021.

According to the River Regions Sports (RRS) release, the​ ​Camellia​ ​Bowl “Legend” Award is “given annually to a person who has made a significant contribution to college football in the state of Alabama.

McCorvey has had a stellar career of more than 40 years as a football coach or administrator for college championship teams at the University of Alabama and Clemson University, where he now serves as the Chief of Football Administration under head coach Dabo Swinney. McCorvey has also coached at North Carolina Central, Alabama A&M, South Carolina, Tennessee and Mississippi State.

He is quoted in the RRS release as saying the ​Camellia​ Bowl Award “is really a great honor. I am elated to be associated with all of the previous winners for this award, especially Coach (Gene) Stallings. I worked for him for seven years at Alabama, and we have continued that relationship over the years. Pat Dye meant a lot to me and was instrumental in my career. Larry Blakeney, Woodrow Lowe and Bobby Bowden all had influences. It’s a great honor to be this year’s recipient.”

The 2021 TaxAct ​​Camellia​ ​​Bowl, pitting the Ball State Cardinals against Georgia State Panthers, will be held on December 25 at 1:30 p.m. (CST) in Montgomery’s Cramton Bowl. The game will be carried on ESPN.