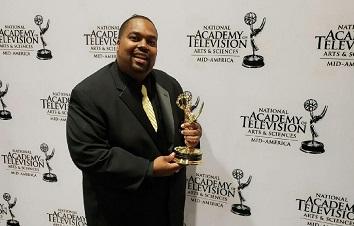 An Alabama State University alumnus has won an Emmy Award for a sports story in Kansas City.

Smith, a news photographer with KSHB-TV in Kansas City, Mo. recently won an Emmy at the 42nd Annual Mid-America Emmys sponsored by The National Academy of Television Arts and Sciences (NATAS). Smith won for Best Sports-News Single Story titled “Local Sports Artist Found Inspiration in Royals ‘Never Give Up’ Attitude.” Smith not only was the videographer, but he also edited it, and assisted in helping put this Emmy Award winning story on social media for his television station.

“I won the award with sports writer Dee Jackson, who I interned under at CBS WAKA TV 8, now Alabama News Network (Montgomery, Ala.), who is also my co-worker and the one whom I had the honor of working with for this story,”  Smith said.

This is not only Smith’s first award, but his first nomination. Smith also was nominated for two other Emmys in the following categories: “Investigative Report – Single Story/Series” and in “Best Newscast – Evening Market 1-49”.

When asked about his reaction toward winning the Emmy, Smith said he was “speechless” after hearing his name, as well as Dee Jackson.

“It was surreal. I put in a lot of hard work to get to this point and looking back on how I hustled, it was most certainly worth it,” Smith said. “I feel humbled and honored to win such a prestigious award.”

The Emmy-winning video addresses the life of an artist known as Anthony “AO” Oropeza who became inspired by the Kansas City Royals. At one point, Oropeza found himself overwhelmed with his day-to-day life, soon deciding to put his love for painting to the side. The “men in blue” became his inspiration through their persistence, encouraging Oropeza to get back into the game. Oropeza’s studio carries a framed rejection letter from applying to art school that also inspired him to continue to perfect his craft.

Smith’s career began as an intern at the Alabama News Network's WAKA TV 8 where he met his intern coordinator Jackson. Under his tutelage, Smith learned how to find information, shoot videos, and edit and write copy. Smith also worked on the campus of Alabama State University at its National Public Radio station WVAS as a radio personality; going by the name of "DJ D-Smooth" on its Bama State Radio. After graduation, Smith was offered a full-time position at WAKA-TV 8 as a news photographer, where he would be employed for four years until having the opportunity to go to KSHB-TV  in Kansas City to work with Jackson, who was already employed there as a sports reporter.